By LS Pioneer News - October 23, 2019
Every year when the trees begin to change, the crops come down, while the tents go up, we celebrate the West Lampeter Fair from September 25th to the 27th. Parents and children from all around come to enjoy the fun games in tents, mouth-watering food, and local agriculture projects. In those three days, a lot happened for the Garden Spot FFA chapter from the Lampeter-Strasburg High School. 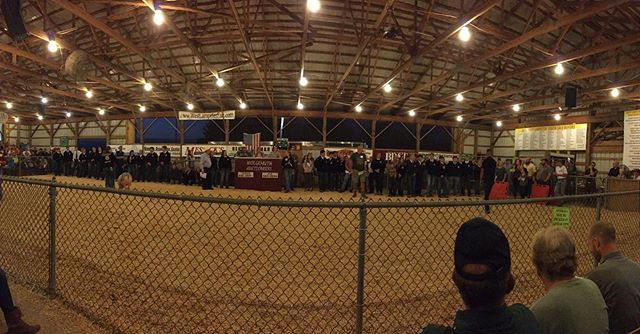 Later that day was the Market Lamb show where more of our members had exhibited, Leah Welk received Grand Champion Lamb and Grace Hess had received 3rd and 4th place for her lambs. At 6:30 pm the Market Goats show was held, and Leah Welk had received Grand Champion, and Katie Ranck had received 4th place twice and 6th place for her goats. This year the Garden Spot FFA had collectively invested 320 community service hours at this year's fair, with helping at fair setup, our food stand, and with fair tear down. Countless members also helped at our food stand through fair. This year our food stand started selling sausages on a stick, and those did pretty well.

On Thursday, our chapter participated in Upperclassmen Livestock Evaluation Contest. Also attending were Hans Herr FFA, Pequea Valley FFA, Grassland FFA, and Manor FFA. One of the competitions we did was a tug of war where L-S had won the championship tug of war battle. Thursday evening, the Dairy Beef and Market Steer show was held where 7 of our members had placed within their classes.

On Friday the 27th, the underclassmen had a judging day where they had seen 6 classes as well. The judging took place so that current Agricultural education students can learn more about how to judge animals and crops. Judging is when the students have a chance to place the animals that are in that class that they are in. Friday evening also holds the Youth Livestock Auction.

Fellow FFA member Tobias Leaman was diagnosed with bone cancer early this summer. Due to his condition, he was unable to continue care for his two pigs. FFA members took on the responsibility of finishing his market hog project. Tobias’ pigs were sold Friday evening, with the understanding that all proceeds would return to the family to cover medical expenses. The community raised over $20,000 to go towards Tobias’ future and medical expenses for the Leaman Family.

That night the Manor (Penn Manor High School), Garden Spot FFA chapters and 4-H members gathered together to be there for one another in a time of need and a time to support a fellow student. This was a true example of community and family.