By LS Pioneer News - September 29, 2017
I recently finished reading Rumble Fish written by S.E. (Susan Eloise) Hinton and published in 1975.
The book starts with Rusty-James on a beach and he runs into an old friend of his that he hadn’t seen in years, Steve. That’s when he flashes back to everything he and Steve had done and been through when they were kids. Rusty-James’ memory is all messed up, and he barely ever remembered much from his childhood, but seeing Steve made everything come back to him… and that was probably for the worst. 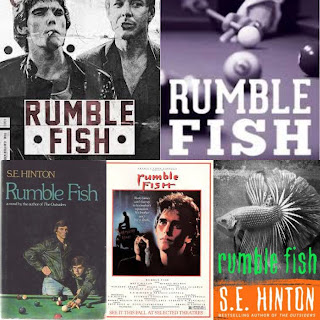 Most of the book is from Rusty-James’ point of view (in a flashback) when he was fourteen years old. He was the toughest kid in his neighborhood… besides his brother, the Motorcycle Boy, of course. The Motorcycle Boy’s real name is never said, everyone just calls him the Motorcycle Boy because he was constantly stealing and riding motorcycles. He was older than Rusty-James and everyone in their neighborhood respected him and thought he was the coolest and toughest guy to step face on planet Earth. He didn’t talk much, he was color blind, he was half deaf, and he had the worst memory imaginable. Rusty-James always said how he wanted to be like his brother when he got older… until he realized what was really wrong with him.

One night, Rusty-James, Steve, and the Motorcycle Boy all went cross the bridge that’s over a large river that separated their small, run down, poor town from the bright, booming city. The Motorcycle Boy forgot that the two younger boys were with him, and he took off to do his own thing. While Rusty-James and Steve were alone, they got jumped by two guys in an alley.

The knocked out Rusty-James (and nearly killed him) with a crowbar and they were going to start in on Steve as well, but the Motorcycle Boy showed us and scared them off. Steve was convinced he was dead, but the Motorcycle Boy said he was alright. Rusty-James could hear what was going on, but he couldn’t open his eyes, and he couldn’t speak, so he just sat still and listened to his brother talk more than he’d ever heard him before. It was a thing he did. He would either talk to himself for hours on end, or he would keep his mouth shut.

Through all of his muttering, Rusty-James realized how alone the Motorcycle Boy was. He realized that he didn’t want to be just like him. He had no one. Their mom had walked out on them when Rusty-James was too little to remember, and the Motorcycle Boy had been only six years old. Their father was a drunk who blew all of their money on booze, so the two brothers had to find money any way possible. They would steal hubcaps and sell them, rob gas stations, and gamble in games of pool down at a local bar called Benny’s. Rusty-James had never realized that the Motorcycle Boy couldn’t appreciate anything in life, because he didn’t have anything to appreciate. He couldn’t even appreciate the color’s of the bright street lights or the sound of music because he was color blind and nearly deaf. 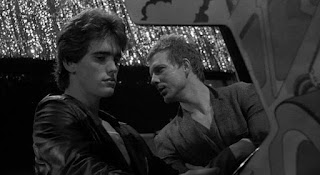 The brothers managed to get home that night, but after that, nothing would ever be the same for Rusty-James. A few days later, he was following his brother around town, when he went into a pet store that he’d been hanging out at a lot recently. He was staring at these fish that the owner said were called ‘Rumble Fish’ because you couldn’t leave two alone together, or they’d kill each other. When Rusty-James said he loved the bright colors of the fish, his brother commented (for the first time showing any kind of depression or despair) that he wished he could see the colors of them.

The Motorcycle Boy seemed lightly bothered by the fact that all those animals were caged up, but left when the owner closed the store. That night, he left the house and Rusty-James followed him curiously. He followed the Motorcycle Boy all the way to the pet store, where he broke in despite his brother’s protest. He opened all the cages and let the animals free, then took all of the ‘Rumble Fish’ with him as he walked out the door and down the street towards the bridge over the river. 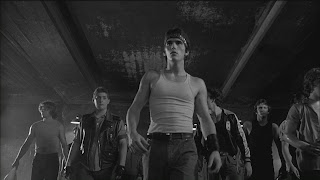 By then, the police were after him for breaking in. Rusty-James said he was told there was a warning shot… but the policeman that had shot him had been after the brothers for years and knew that his brother was almost deaf. When he reached the bridge, the police threw him up against their car, and while he was looking at the police lights, he noticed they were gray… they were supposed to be red and white, but they were gray. Everything around him was gray and he couldn’t hear anything.

He stayed that way for the rest of his life. After the Motorcycle Boy died, Rusty-James got everything he had. He was color blind, half deaf, and barely had any memory at all. In fact, he had forgotten everything he’d gone through as a kid until he saw Steve at the beach that day. He said he thought he’d forget it all after Steve left, but it was taking him longer than he thought it would.