Showing posts from July, 2015
Show all

By Ben Pontz - July 30, 2015
With the Lampeter Fair less than two months away, the anticipation for the annual Fair Queen contest is building. This year, the contest will be held on Wednesday, September 23 at 7:30 PM in the horse ring after a parade from the high school to the fairgrounds that begins at 7:00. Last year's iteration of the contest featured 16 candidates, each representing a different club from the high school. However, this year only seven clubs nominated candidates; ostensibly, less interest existed among eligible students in the school, as many clubs could not find anyone interested in participating to nominate. Sarah Sambrick, the Varsity Club's nominee, won in 2014, and Hunter Bradley, the Future Nurses Club's nominee, was the runner-up. The club that nominates the winner receives $50, while the club that nominates the runner-up receives $35. More significantly, the Fair Queen goes on to represent the West Lampeter Community Fair during the State Fair Convention in January. Next
Read more

Community comes together to "make a difference" for Harnish family 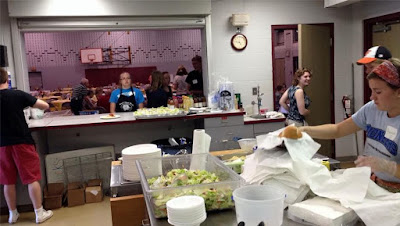 “God knew what he was doing.” On May 9, Ken Harnish sustained life-threatening injuries as he was trimming trees; Benjamin Eidemiller was among the firefighters who responded to the scene, and Alyssa Van Lenten was with Kelly -- Ken’s daughter -- at a bonfire party at the time of the accident. This confluence proves to Van Lenten that God was involved, and inspired her and Eidemiller --both rising L-S seniors -- to plan a spaghetti supper, bake sale, and silent auction to help defray medical expenses for the Harnish family. “Sometimes you see other people struggling or hurting and you come up with a great idea to help them, but rarely do you actually follow through with the plan,” Van Lenten explains. “The whole event was about serving the Harnishes, serving the community, and most importantly serving the Lord. The benefit showed me that it is possible to make a difference, even as a teenager.” Some 483 people came to the event, which was held at Refton Brethren in Christ church
Read more

Editorial: Hope for the Phillies? A roadmap to success

After a dreadful first half, the Phillies are poised to improve ... quickly. For the first half of the season, the Phillies, to steal a quote from the Grinch, "stink, stank, stunk," posting the worst record in Major League Baseball (MLB). Manager Ryne Sandberg quit. The team was ravaged by injuries and ineptitude. Watching games was painful; clearly players approached their jobs with complacence. However, since the All-Star break, the squad has won six of seven games. And while I am not willing to jump on a playoffs in 2015 bandwagon, I am willing to set aside my usual cynicism and postulate that if some things go right, the Phillies can be competitive as early as 2017, if not next season . It starts now With the trade deadline approaching in less than a week, how the front office handles the roster and mounting pressure to trade star pitchers Cole Hamels and Jonathan Papelbon will be the first factor in determining the outlook for the future. Although both could
Read more 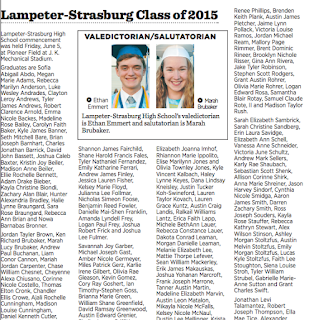 On Wednesday, June 24, Lancaster News Paper printed the list of graduates for the Class of 2015. If you missed the issue you can view a PDF copy here . Wednesday, June 24 issue of LNP Follow  LS Pioneer News  on  Facebook ,  Twitter , and  Instagram .
Read more
More posts