In My Own Words: Girls Soccer - A Season to Remember

In this installment of In My Own Words, Jenna Daveler talks about playing soccer on the varsity team as a freshman.

This season I played on the Lampeter-Strasburg Girls Soccer team. When I first started I was really nervous because I was trying out with girls much older than me.

The year before I played for PA Classics Development Academy. After the first week of preseason and tryouts I got the e-mail that I made Varsity. I was so excited but also very nervous at the same time. 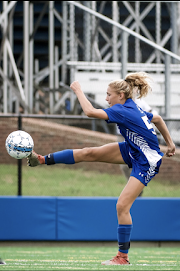 My coach told me that she wanted to me to play as a striker position and score goals for the team. After she told me that I was hesitant because I have played defense for so long.

A little bit into the season I scored my first varsity goal. I was so thrilled to have scored a goal. My team dumped the water on me after I scored. Halfway through the season my coach put me back to defense to hold the back line. I was just getting comfortable playing upfront, but I was glad to be playing defense again.

Over the time I played offense I scored five goals. Our team overall did really good this season. We won our first district game in double overtime against Susquehannak. Then in our second district game we lost to Lower Dauphin, 3-1. 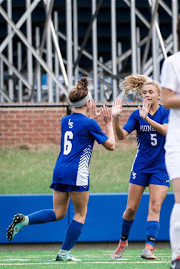 I was the only freshman on varsity so I was scared if I would have any people to hang out with. Right away I made great friends that were so nice!

I made really good friends with two girls that were older than me and they lived near me so we drove home together after every game and practice. I made memories that I would never forget and made friends that I would hope to stay friends with forever.

I hung out with a lot of the girls outside of soccer. We went out to eat a lot and had such a great time. I hope to play soccer for the school again next year and continue all my friendships. I am going to miss the seniors a lot though. It was such a fun season and I am so glad that I got the opportunity to play for the school.

Below are pictures of some of the friendships I have made through soccer this year.