By LS Pioneer News - January 16, 2018
On Wednesday, January 10, the Lampeter-Strasburg Boys Basketball team won their Section 2 “showdown” against the Baron of Manheim Central to capture the mid-season sectional first place.

The first quarter was very close but the Pioneers began to pull away after halftime for a 48-23 victory. 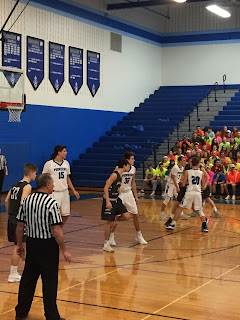 The Barons attempted to shut down 6’10 senior Ryan Smith. Central was successful in guarding him for the first half, but collapsed in the second half when he scored 17 of his 21 total points of the game. While Central played a good defense on Smith, they left open a dead eye three point shooter senior Issac Beers who scored 15 points.

After the gamejunior Adam Stoltzfus said, “Manheim Central's Connor Hostetter was a problem for the team by being the second leading scorer in the section, but not for our defense. We only allowed him to score 11 points and three 3 pointers, which helped shut the Barrons down”.

The boys varsity team went 6 and 1 with their first run through the section after losing a big upset game to Elizabethtown that the Pioneers were expected to win.

The Pioneers will replay the section teams again starting tonight (weather allowing). The Pioneer basketball team is hoping to sweep the section this time around.