By LS Pioneer News - November 15, 2017
Last weekend the Lampeter-Strasburg Asian Culture club and Mr. Brian Fisher’s Mandarin Chinese classes were invited on a trip to the Franklin Institute to see the Terracotta Warriors.

Out of the estimated 8,000 Terracotta Warriors, ten were on display at the museum. 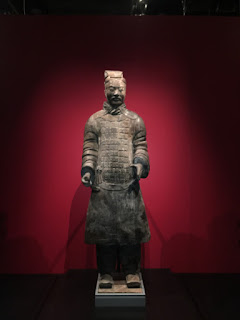 The farmers contacted experts, who said that the statues were over 2,000 years old, The Terracotta Warriors were created for the first Emperor of China, Qin Shihuangdi, to protect him in the afterlife. Qin Shihuangdi declared himself as China’s First Emperor in 221 BCE as he acquired all the rival states in the Warring States period (475-221 BCE). In early burial practices for a person of high status, riches, and human sacrifices were made; so it would be understandable for Qin Shihuangdi to create a clay army

It is thought that it took 12 to 14 years to make all of these clay warriors with each person making around 6 or 7 each year. But not all of these people were artisans, some were laborers and craftsmen. 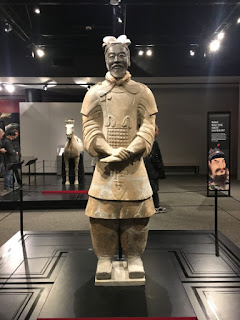 Today, the Terracotta Warriors are just grey because of the exposure to air, but with the chemical residue, experts can believe what the warriors looked like back then. It wasn’t just warriors that Qin Shihuangdi made, there were chariots and horses, exotic animals, and pottery.

There are four pits that contain the Terracotta Warriors. Parts of Pit one and two have been excavated as the fear of damaging the warriors by exposing them to the air. It is a mystery of what is inside of the tomb, but archeologists want to respect their elders and there has been a high amount of mercury and the fear of the traps that were set up to protect the tomb. 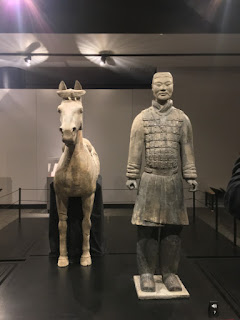 The Trip
The day started off by arriving at the Lampeter-Strasburg High School at 7:15 in the morning. When my mom and I arrived, a lot of people were already there on the bus. Promptly at 7:30, we were off on our way! Mr. Fisher (who is in charge of the Asian Culture club and Mandarin Chinese teacher) handed out the tickets, stickers, and a list of restaurants to go to.
We arrived in Philadelphia at the Franklin Institute at 9 am; It was going to be another 30 minutes before we were let in to see the exhibit. I couldn’t wait; I was restless. My mom and I looked through the cool gift shop the museum had.

Finally, the Terracotta Warriors exhibit was open. I handed the worker my ticket and I went upstairs to sit down and watch the short informational movie. At the end of the movie, the doors suddenly slid open to reveal one out of the ten Terracotta Warriors. Everyone gasped. We pour into the exhibit, phones out and ready to take pictures. 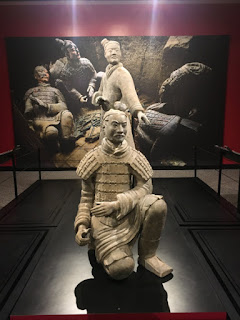 “I am amazed by the craftsmanship of the warriors! It’s astonishing that the details have lasted all that time” said Melissa Evans.

The exhibit didn’t just have the Terracotta Warriors, there was some of the weapons the warriors had, pottery, and animals. There were some interactive screens that showed a map of the pits, the different types of warriors, and what the warriors looked like.

What surprised me the most is that the exhibit was split into two different sections. The first section was larger than the second one but there was a lot of thing on display. Like a clay model of how the process of making the Terracotta Warriors.

There were also some more simple clay statues that were made for the burial which was from the Warring States period. These statues were more uninteresting and boring as their body was smooth and the absence of the detail on the Terracotta Warriors was noticed.

Also on display were some burial sacrifices from the Han Dynasty (202 BCE). They were undoubtedly smaller as the Han rulers did not continue to follow the First Emperor’s plan. I think it's safe to say the Han rulers were not as obsessed with immortality was Qin Shihuangdi.

Geese and an animal coffin were on display near the musician, who was thought to provide entertainment to the Emperor.

While Qin Shihuangdi reigned as Emperor, he made several tours of his empire on chariots. There were replicas of two bronze chariots were very large; they took the most amount of space in the whole exhibit itself. Now the size of the replicated chariots was smaller than the size the First Emperor would have ridden on; as the horses were the sizes of ponies.

The whole experience was amazing and I’m thankful that I had the chance to go! The Terracotta Warriors will be on display at the Franklin Institute in Philadelphia, PA until March 4, 2018. You can find more about this here: Terracotta Warriors

See all over Julianna's picture at the Franklin Institute here.