By LS Pioneer News - October 31, 2017
This year the Lampeter-Strasburg Junior High Football team had a record of 6-. Despite the great record the team still did not make the playoffs for a surprising reason. The league simply does not have playoffs for our junior high level.

We started our season in June with weight lifting. We did that through August. Then we started holding actual practices until Mid-October. As is the nature of the sport, several players were injured over the course of the season. Their injuries range from numerous concussions, a broken arm, and a thigh injury. 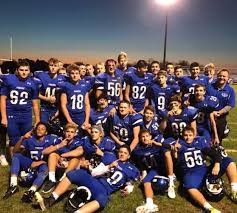 Our first game of the season was against Manheim Central. We defeated Central 12 to 0. Our sole loss of the season came from Ephrata, 24-16.

Over the next five weeks, we won against: Garden Spot, Solanco, Cedar Crest, Elizabethtown, and Cocalico.

We ended the season with a win over Cedar Crest with a score of 34-0. That last win of the season was very emotional as it was the last time we would play on that field before high school football.

Our coach said, “Thank you for a great season, you were a joy to coach!" We finished the night with a team picture. We we headed to the locker room we listened to Sweet Carolina.

Now we all look forward to our banquet. The banquet combines the junior high football team and the high school football team. This was one of the best seasons.