Do you have what it takes to be Fair Queen? Learn what Megan Mellinger did to become queen

By LS Pioneer News - October 20, 2017
September was a very exciting month for the Garden Spot FFA. While many people refer to September as the start of fall or even the start of school, FFA members commonly refer to September as “Fair Month”. We spent all month planning and prepping our food stand, getting livestock and exhibits ready, and spending time setting up with the fair board and other volunteers. For our entire chapter, it has been a whirlwind month, but for our President, Miss Megan Mellinger, it has been even more so. Not only did Megan involve herself in all of the previously mentioned, she spent the past few months preparing to compete in the West Lampeter Community Fair Queen competition. 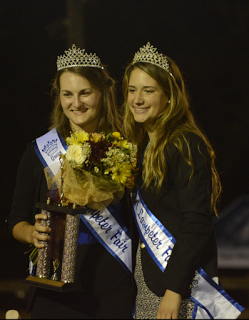 Back on Tuesday, June 13, she attended the chicken barbeque, an event our entire chapter is very involved in. Megan spent some time writing an essay on what the fair means to the community, writing an introduction speech for the competition, attended an interview with a panel of judges, and had to answer an impromptu question. 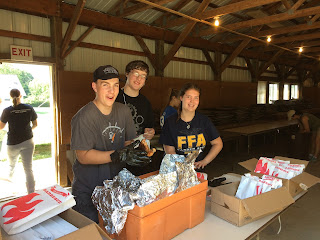 To ready herself, our advisor, Mrs. Janae McMichael, had Megan give her speech in front of her Agriculture Mechanics class almost every day the week before the fair. Every day, you could see the improvement of her memorization, posture, diction, and most importantly, confidence. When she gave her speech on stage, Wednesday, September 27, she was flawless. It was clear that the practice had paid off. 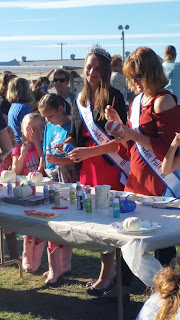 While she did prepare for a month, the most exciting part of the Fair Queen competition was, well, the actual day of the competition. Megan rode in a 2007 “FFA Blue” Series 3 BMW Convertible provided by Todd and Jennifer Miller. It was adorned by a blue and gold glittery sign so big, you couldn't possibly miss it, created by Mikayla Miller. She was escorted by sophomore, Dylan Lechner and “candy throwers” Mikayla Miller, Owen Miller, Hadassah Hoover, Hosanna Hoover, Saraiah Hoover, and driver, Todd Miller. The parade started at the LSHS parking lot, continued down Village road, and ended in the Fair’s horse arena. The community lined the streets and fairgrounds to watch the candidates in the parade, and of course, snag some candy! 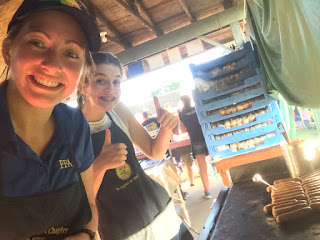 In all honesty, before the parade, Megan expressed to me how nervous she was about her speech. She must have recited her speech ten times before the convertible even left the parking lot! Because of this, we held our breath and waited to hear the speech we had heard countless of times. After about a minute in a half, she sat back down and we all released the air we had been holding in; her speech was flawless! She did not miss a word, spoke in a clear, confident voice, and stood with poise in which a princess would be jealous of. 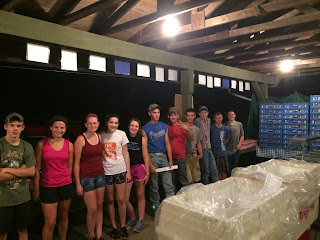 It truly was amazing to hear about their unique opportunities and what they learned from the experience. By this point, the judges had made their decision. The emcee, Mrs. Melissa Herr, announced the top five moving on to the second part of the competition. Again, we all held our breath in anticipation. Much to our excitement, Megan was announced as the second candidate moving into the top five!

This alone was extremely exciting to us as Megan was our Fair Queen candidate for last year and did not make the top five. The final part of the competition was the “final question”. All of the ladies were given the same question, “How can we bridge the gap between older and younger generation in rural and urban residents?” Because it was the same question for everyone, the ladies were given earplugs to ensure everyone had a fair shot.

This time, it took Megan a few seconds of contemplation to come up with her answer, regardless, it was very well said. After all five answered, it was time for the judges to decide who they would crown Fair Queen Alternate and Fair Queen. Miss. Kimmel and Miss. Sauve gave their closing speeches. While they were lovely, we were practically bursting out of the seams from anticipation. But then, it was time. Mrs. Herr announced that Miss. Greta Bennett of Student Council had received Fair Queen Runner up. Then came the moment of truth, the crowning of the 2017 West Lampeter Community Fair Queen. We were in complete awe and excitement when “Megan Mellinger” came out of Mrs. Herr’s mouth… Megan had won!

As a chapter, we could not be more proud of such a wonderful young lady not only representing our chapter as FFA President, but now, also representing the Garden Spot FFA as Fair Queen. No matter what happened, we knew we would be proud of Megan for representing us, working so hard, and getting up on that stage and facing hundreds of people. Megan, we are so proud of you and congratulations!

If you would like to see videos from this event, please feel free to check out our Facebook page.