The Lampeter Bowl: Is Seven Our New Lucky Number?

In this installment of In My Own Words, Alyssa Zaepfel talks her about experience in the marching band at last Friday's Lampeter Bowl.

Last Friday, September 18, we traveled a short distance to Conestoga Valley for an away game. By the third game, I considered myself experienced with the vibe of the football game, but nothing could have prepared me for the electric enthusiasm of the Lampeter Bowl. 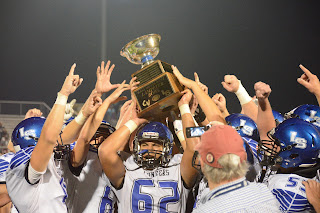 Every year, Lampeter-Strasburg and Conestoga Valley play in the Lampeter Bowl, symbolizing the different hemispheres of Lampeter- the east and the west. The L-S district includes the west, while C-V has the east. So far, L-S has won six years in a row, and we were fully prepared to win for the seventh.

We added further special effects to our show. During a section in the second part, we swirl around as if we are in a tornado, symbolizing the chaos in the Masquerade ball. We also created a disappearing effect at the end of the show. People would break from the ending formation in waves, taking cover underneath a huge tarp with the Phantom mask or behind a curtain on the home sideline. It was a dynamic ending, but we still have many things to fine tune. 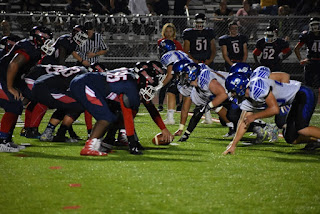 Although the half-time show was solid, the highlight of that night was being in the stands. We played a larger variety of songs, including our newest addition, “My Type”, by SAINT MOTEL. I just kept smiling and playing, occasionally glancing to the scoreboard. It wasn’t until the middle of the fourth quarter when I noticed a new feeling from the crowd: angst. I turned to the scoreboard and squinted at the score. Our scores were tied. My band members seemed to feel the vibes too. We began to play a little bit louder, and watching the game with focus instead of talking amongst ourselves. We yelled and hollered when they stopped the clock three seconds too late, hoping the officials in the little box across the stadium will hear us out. As marchers, we know that every second, every beat, counts, and for the sake of our team, we need those three seconds.

I have a rather vague understanding of how football works, but I know that a game ending in a tie means one thing: overtime. The overtime experience is like nothing I have ever experienced before. The tension is unbelievable. Everyone is going between muttering nervously to those around them to yelling and cheering on the top of their lungs, all depending on where that ball falls. 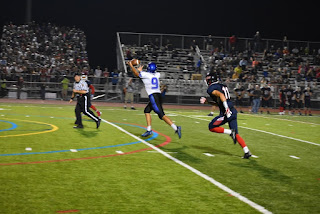 As if overtime itself is tense, double overtime is insane. My voice cracked several times from yelling so loud. Some people from the rows above me moved down to the front to get a better view of the plays. We all crossed our fingers and toes, telling ourselves in assuring voices that we will bring the trophy home. Nervously looking at the field, I see the ball fly high and land in someone’s arms. Then our score board blinked to 57. We won.

The crowd erupts. The band takes a few seconds to celebrate, then we exclaim our loud, triumphant fight song. I almost couldn’t play; I was smiling too much. On the bus ride home, we sang a painfully out of tune version of “Bohemian Rhapsody”. I don’t know whether I lost my hearing or my voice first, but either way, it was all worth it.

In My Own Words is a first person written series that highlights Lampeter-Strasburg High School students activities.
By Alyssa Zaepfel Conestoga Valley Football In My Own Words Lampeter Bowl marching band