I'd be one happy nugget if you said YES!!

In this installment of In My Own Words, Gabby Harner talks her homecoming proposal experience.

Last Tuesday, I was at my house when all of a sudden my dog started barking repeatedly. I looked around the front porch but did not see anything. I didn't think much of it as the dog barks every time someone walks by the house. I decided to continue watching my little brother for my parents until they were done doing yard work outside. 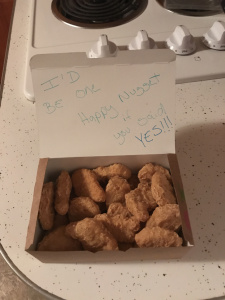 A few moments later, I look up from the couch and see a blob of purple. I did a double-take to see my boyfriend standing there and my parents behind him. I quickly stood up and saw that he was holding something in his hands.

As he approached, he opened it. It was a box of McDonald’s chicken nuggets. On the lid was written “I’d be one lucky nugget if you said yes.”

I stood there, shocked. I didn’t know what to say. I then said, "Yes!" hugging my boyfriend tightly and so excited to be asked to the homecoming dance. 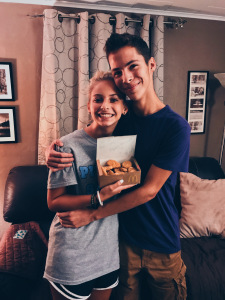 After popping the question, my boyfriend was able to stay and hang out for a while. My boyfriend and I have been together for four months. We are both excited to go to the homecoming dance together and will have the time of our lives!

The homecoming dance is Saturday, October 14.