By LS Pioneer News - May 18, 2017
On Tuesday, the Lampeter-Strasburg High School’s Thespian Society held its annual banquet and awards ceremony. The evening was hosted by members of the thespian society and began with the usual senior skit. The skit is performed by younger members of the society, to depict the journey of the seniors’ performing careers. The skit walked the audience through four years of singing, dancing, and acting. It began with the fall play of their freshman year, Love Rides the Rails, and ended with this past spring’s musical High School Musical. The skit showed everyone in attendance what happens behind the scenes of our high school productions.

Following the skit, was the awards ceremony. Though this ceremony may not be what you expect. The gag awards ranged from Best on Stage Romance to Most Likely to be an NBA Star. After that, more serious awards were given out, including Best Actress and Best Stage Manager.

After the ceremony, the celebration moved to the cafeteria where there was an array of desserts. Thespian society members of the past, present, and future, gathered and shared stories of their time on the L-S stage. 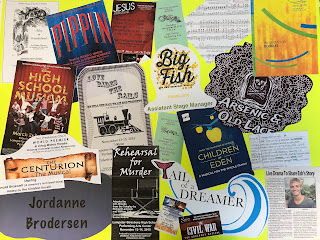 We said “Goodbye” to our wonderful senior performers, and thanked them for giving it their all for their last performance on the L-S stage. And we hope they "Break a leg" in college next year.