Spring Blast proves to be a real blast

In this installment of In My Own Words, Delaney Funk talks about her experience at last weekend's Spring Blast put on by the PTO.

On Saturday, April 13, the freshmen and sophomores kicked off the annual Spring Blast party with a bang! The party, held in the grand hallway, cafeteria, and wrestling room, welcomed the underclassmen students with several tickets, with which they could write their names on (or in my case, write Rick Astley on) and put into bags to be drawn for receiving prizes.

Further into the madness, more fun could be found, such as the Wii and projector displaying space invaders, or the large “Candyland” table full of candies the students could put into brown bags to take with them. There was even a pro balloon maker, making crown, animals, swords and the like!

Into the Performing Arts Center, one would find a Karaoke area, and up the stairs, you could play enlarged versions of checkers, tic-tac-toe, or even make leather designs with Mr. Breneman. In the cafeteria there was a laser light party, complete with music—loud as ever!—and teachers handing out glow-necklaces, while in the hallway you could play ping-pong with your friends.

Back downstairs and into the hallways, there was plenty of food to be eaten: sandwiches, sweets like cookies, and even a frozen yogurt machine and toppings!

Taking a left, however, would take you down a beautiful, peaceful hallway, with posters from seniors who are graduating.

But more importantly, at the end of that hallway is a laser-tag arena! 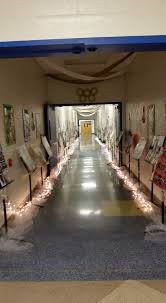 Students could fight with the red beams of light, choosing red or blue team, and duke it out on the field to see who could remain victorious!

I’m sure to come back for a rematch next year, and so are others!

“I guess you could say the Spring Blast was a real blast!,” says Emma Medlock, a freshman at the time, and I couldn’t agree more!