By LS Pioneer News - March 22, 2017
The Lampeter-Strasburg band program held its annual district-wide festival for grades 4-12 last evening in the Performing Arts Center, which drew a full house of family, friend, and faculty spectators that required the opening of the balcony, a rare occurrence. 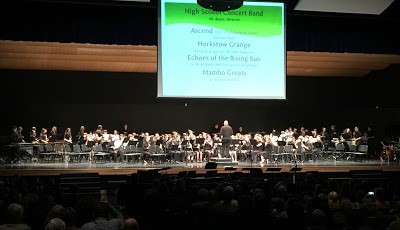 Freshmen Jessica Leaman says, "I always love going to this concert because you can see the excitement of the fourth graders who are performing in their first concert. It is really neat to see the progress that is made and the skills that are developed the longer you play an instrument."

The concert started with the fourth grade band and then the fifth grade band who are both directed by Mrs. Heather Ceresini. Each grade played two songs.

They were followed by the Martin Meylin Middle School band who played three selections. The concert concluded with the High School band directed by Mr. Larry Royer who played four selections. One of the songs was a percussion only piece. The blue and white jazz bands played during the transitions of age groups.

The final song of the night was "Mambo Greats." Percussionists from other grade levels were invited up on stage to accompany the song with shakers. The last song really brought everyone together with people dancing along and having fun.

It was really cool to see the PAC filled with families who support the musicians who were a part of the L-S band festival.