On August 9, I had the privilege of attending a Mike Pence rally at the Lancaster Host Resort. Pence is currently the Governor of Indiana and running mate of Republican nominee Donald Trump.

One of the first speakers was David Dumeyer, Chairman of the Lancaster Republican Committee. He told a rowdy audience, “There are two things we love to grow here in Lancaster: agricultural crops and Republican victories.” Local and statewide candidates also spoke, including Keith Greiner, Scott Martin, and Otto Voit.

After several minutes of waiting, Gov. Mike Pence walked onto the stage and received a standing ovation from the crowd. It was a bit surreal to witness in person what would normally be seen through a television screen.

Thankfully, I had the opportunity to sit in the second row. When Pence came to our side of the stage, I gave him a thumbs up. He saw, pointed to me, and gave me two thumbs up back. And that, my friends, was the closest I got to meeting Mike Pence.

Pence started his speech by reminding us, “I am a Christian, a conservative, and a Republican in that order.” He spoke about the failure of the Obama Administration, the threat of a Clinton presidency, and the necessity to elect Donald Trump. He also talked about his record as governor and how he lowered taxes, cut spending, and balanced budgets: “Today, there are more Hoosiers going to work than ever before in the 200-year history of Indiana.”

After speaking for about half an hour, Pence closed, “This election is between change and the status-quo. It’s between a vision for a stronger America at home and abroad or continuing down the same path of failed leadership that has weakened this nation. It’s a simple choice, and America is ready to make Donald Trump the 45th President of the United States.” 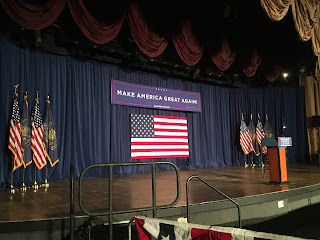 The most emotional part of the event was during the Q&A session when an 11-year-old boy named Zack told Gov. Pence, “I know you passed Right to Try in your state. When you and Donald Trump are elected, will you support Right to Try? Both my father and our friend Matt have ALS, so they’re dying.” Clearly shocked, Mike Pence paused for a moment, walked off the stage, and hugged Zack. Pence told him, “I promise you, I promise your dad, and I promise Matt that we’re going to take it to Washington and we’re going to get it done. We’re going to open the doors to treatment.”

After the event, I asked two Lancaster residents who attended the rally what they believe Mike Pence adds to the Republican ticket. David Griffith, a Lampeter-Strasburg graduate, explained, “I don’t know if there could’ve been a better running mate to compliment Donald Trump. While both are very direct, Pence is far more humble. I think Pence will be able to ground the campaign and the administration.”

Tom Jones, who was an alternate delegate at the Republican National Convention, said, “Mike Pence's upbringing and faith are much more similar to my own than Donald Trump's. This brings me confidence in voting for Donald Trump as do the other individuals that Donald Trump has surrounded himself with. I believe Mike Pence brings a balance and fullness to the Republican ticket.”

It was a tremendous experience, and I am extremely glad I went. The only thing that puzzles me is why Mike Pence isn’t the Republican nominee.


Disclaimer: I am a Republican who believes in conservative values, such as limited government and liberty. I don’t support Donald Trump. I just don’t support Hillary Clinton more. My problem with Trump is not so much his proposals but rather his lack of principle. That said, Mike Pence is the man!