By LS Pioneer News - June 01, 2016
For the third time this season, the Lampeter-Strasburg Pioneers softball team took to the diamond to play Donegal, but for the first time this season, it did not emerge victorious against the rival Indians, falling 4-1 in the semifinals of the District III playoffs.

Jordan Weaver struggled to command the strike zone, and walked five hitters; meanwhile, the bats mustered only four hits. Those two ingredients were not conducive to success.

Weaver walked the first hitter of the game and then walked another hitter in the first inning, but solid defense helped her escape a first inning jam unscathed. In the bottom of the inning, L-S had only one baserunner, Hanna Garber, who knocked a two-out single to right field and never made it past first base.

It was much the same story in the second inning when the second hitter for Donegal reached base on a free pass. Two batters later, Donegal had runners on second and third with one out, and was poised to score when Caroline Braungard fielded a sharp grounder and threw out the baserunner at home. A flyout to right field helped the Pioneers eke out of that jam without surrendering a run as well. But again, the bats were no help as the team went down in order. 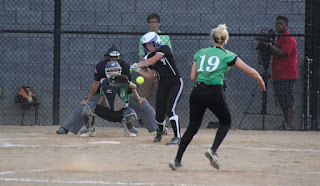 Weaver recorded her only one, two, three inning in the third, while the Pioneers managed their second baserunner of the day, this time Bri Garber reached base on a single; she stole second base, but could not reach home as Jordyn Kondras grounded out to the pitcher to end the third inning.

The magic worked one more time for the Pioneers when they prevented a leadoff single from yielding a run with an inning-ending strikeout for Weaver, one of just five on the afternoon in comparison to 15 her last start.

In the fifth inning, however, the good fortune ceased in resounding fashion for the Indians. A leadoff walk turned into a second and third situation with no outs after a base-hit to center with some hesitation in the outfield allowed runners to advance. The next batter hit a hard grounder to shortstop that Braungard bobbled before firing a strike home to get the out, again allowing for a glimmer of hope that the runner-stranding magic of previous innings would once again come to fruition.

The next batter doubled to score one run while the batter after that, Donegal pitcher Makyla Yoder, singled to right to bring in two runs. Weaver did work out of the jam from there, but the damage was done.

Donegal tacked on another run in its half of the sixth that the Pioneers managed to get back when Bri Garber singled, reached second on an error, and scored when her sister Hanna knocked a base hit to center. It would be the Pioneers' only run of the day.
The seventh inning came and went with neither pomp nor circumstance, and the Pioneers dropped their second game of the season. Now, they will play Garden Spot for third place in District III at 4:30 on Thursday at Garrett Park in Willow Street. The winner receives a berth in the state playoffs.

You can also re-live the game from our play-by-play live tweeting of the game.

Dominance. That's the only word that can be used to describe the Pioneer softball program. They've won five out of the last 6 Section 3 titles, 2 consecutive L-L League titles, a District III title this season, and now four out of the last five PIAA state title games. The team won the 2018 championship, defeating West Allegheny by a score of 6-2. The Pioneers have won all 28 of their previous 28 games, steamrolling into the PIAA title matchup. On the other side of the diamond at Beard Field were the Armstrong River Hawks, who clinched a spot in the title game by defeating North Hills earlier this week.  Pioneers Pose With State Title Trophy (Chris Knight LNP) Junior ace Keiva Middleton started in the circle for the Pioneers. She's been lights out all season, recording a 1.25 ERA and 210 strikeouts in 162 innings pitched. Cameron Sprankle started for the River Hawks. Sprankle entered the matchup with a 3.20 ERA. Both pitchers escaped danger in the first inning, leaving runne
Read more