Baseball team to raise money for A Week Away

By LS Pioneer News - April 16, 2016
When Bear Shank was diagnosed with a brain tumor, his family received many messages of support, but one was different: it was from Lynn Walker, the mother of L-S graduate Caleb Walker, who died from a brain tumor about two years ago.

"Lynn reached out," recalls Lisa Shank, "and offered her support with whatever we needed."

Shank went on to say that it was Walker who first contacted the Children's Hospital of Philadelphia (CHOP) and encouraged the Shank family to go there, where Bear ultimately received treatment.

On Friday, April 29, 368 days after Bear's initial diagnosis, he will take the field with the rest of the L-S baseball team for its annual benefit night.

This year's chosen charity? A Week Away, a foundation started by Caleb Walker before his death that offers patients fighting a life-threatening illness a week's respite from their illness to go on a vacation with the aim of giving them hope to continue onward.

Mrs. Shank suggested the organization to the L-S Baseball Boosters board, which immediately jumped on board. In six years of benefit nights, this will mark the third local charity the game has supported. The goal is to raise between two and three thousand dollars, but Booster President Matt Greenwood quipped "a million dollars" as a dream amount.

To support the cause, the Boosters are selling t-shirts (see order form below ... orders are due Monday, April 18) and will donate profits from the concession stand that evening. The game will be held at 7 PM against Garden Spot at the baseball field. 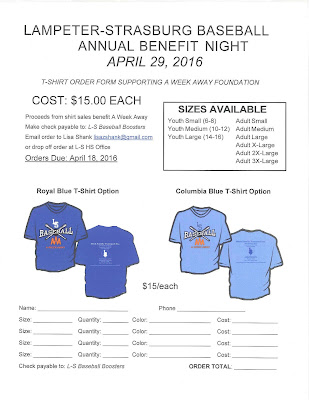