The time has come again for the Lampeter-Strasburg High School musical. The L-S Thespian Society is taking on the newly revived ‘70s musical Pippin. This year’s performance stars Brendan Massar and Jessie Reynolds as Pippin and the Leading Player respectively. They are joined by the hilariously seductive Jarrod Lloyd as Charlemagne, the cunningly charming Joanna King as Fastrada, and the rebelliously spry Ashley Crutcher as Berthe. 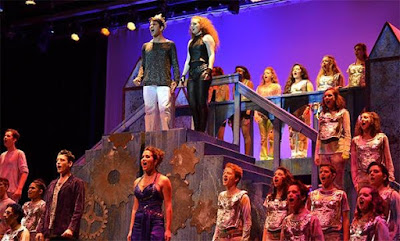 Pippin is a daring show about the son of Charlemagne as he looks for fulfillment in his life. The story is presented as a play within a play narrated by the leading player who naturally breaks the fourth wall regularly to speak to the audience directly. Pippin, to satiate his thirst for life, goes to war, rules a kingdom, and falls in love.

Pippin, being starkly different from classic stage performances, has a quirky unique style full of wonder that intrigues the audience just as it does baffle. Our thespians -- except those playing the few leading roles -- have donned tye-dye clothing to add the pizazz this show calls for. The eccentric style of Pippin stands apart from any recent L-S Thespian Society production. The closest must be Seussical, yet even that emulated the rhyming children’s books it takes its name from.

Pippin is not geared for younger audiences which, judging by the reactions of the students during the teaser, is much appreciated. In fact, although Pippin seems to be on the mature side of musicals presented in the PAC, it has actually been already heavily adapted to make it more appropriate. Pippin is targeted at older audiences, but the quirky fanfare style will do enough to entertain small children, and although some jokes may raise some eyebrows, they will go right over the heads of children. (Warning: There is occasional profanity.) This musical should be great fun for everyone.

Come out to see the performances of our thespian society doing what they do best. A lot of sweat and tears has been put into this from all involved from the main stars to the tech crew and in the pit. Being friends with many of the performers myself, we're aware of the hard work and drama that has gone into making a show that is worthy of our stage. So get some tickets and enjoy the show! It’s sure to be a thrill.

This editorial reflects the collective opinion of the LSNews.org editorial board. Its lead author was opinion editor Aaron Davies. It does not constitute an official position of the Lampeter-Strasburg School District, nor the faculty advisor of LSNews.org. Questions or concerns can be directed to lspioneernews@gmail.com.