By Ben Pontz - February 19, 2016
Sitting behind his desk in an office adorned with an array of team photos, trophies, and plaques, Mr. Eric Spencer, principal of L-S High School, took a deep breath as he pondered what led him to make the decision to depart Lampeter-Strasburg after five years to become a social studies teacher and football coach at McCaskey.

After witnessing the joy coaching football brought him during their childhood, two of Spencer's grown children recently encouraged him to do some soul searching to determine where his true passions lie, and after much contemplation and prayer, he decided to apply to become the head football coach at McCaskey High School, which he hopes to build into a Section One stalwart. 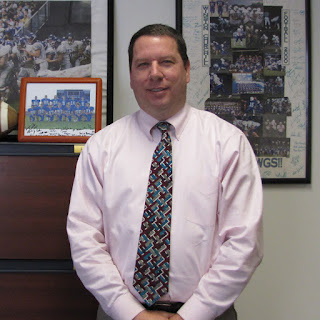 "It really meant a lot to me," says Spencer of his grown children offering him similar counsel to that which he once offered them on following dreams and passions. "They missed seeing me coach, seeing that spark in the eye."

Spencer's coaching career began at Winston Churchill High School in Maryland, where he spent three years before progressing to Quince Orchard High School (also in MD) for a season. Then, he came to Lancaster County, spending four years as the head coach at Garden Spot. He subsequently spent two years as an assistant coach at Franklin & Marshall College.

As he began his career in administration, Spencer stopped coaching to focus on a family medical issue. Ultimately, he was an assistant principal at Boyertown High School before coming to L-S to start the 2011-12 school year.

Acknowledging the demographic juxtaposition between L-S and School District of Lancaster, Spencer points to his prior coaching experience as proof he has what it takes to turn the recently floundering McCaskey football program around.

"[McCaskey has] great, hard-working kids," he says. "I've turned three programs around ... made them respected programs. I fully expect to do the same thing here ... we're going to play competitive, disciplined football."

Spencer's last day at Lampeter-Strasburg will be June 30 (pending approval of his resignation by the School Board), and then he will take the reins at McCaskey. He notes that he is happy to take over a Section One program so playing L-S would not be on the immediate horizon in order to obviate any potential controversy.

"The best part of being an educator is helping people dream and find out what they love," Spencer says. "Sometimes, we forget to do that ourselves."