By Ben Pontz - December 08, 2015
Assuming you don’t read French, let’s specify that the title of this piece literally translates into “As Best They Could,” connotatively translated into describing something that has been only moderately or partly successful. Why in French? Well, there’s this really not-so-little event going on in Paris right now called the 2015 United Nations Climate Conference. And I decided to break it up from the anticipated arrival of another ocean segment, but this is simply too important to hold back for even one more week.

So the rather off-putting title of this article was selected because as well-intended the Paris conference seems, the leading representatives of nations are failing to come up with a resolution the summit was intended for. The mission statement for the summit encompasses reducing greenhouse gas emissions in order to limit the global temperature increase to no more than 2℃ above pre-industrial levels.

So that we understand the entire purpose of this, let’s acknowledge the importance of the two degrees. Reaching the global temperature increase of 2℃ would nearly guarantee low-lying island nations to be new fish habitats, droughts and storms to become supercharged, and a third of all species to be put to extinction. This is the prediction of course. It could be better. It could be exponentially worse.

The graph’s left axis represents global greenhouse gas emissions, but the unit is hard to make out. But overall it shows the trend of increased temperature with impacts of those trends. 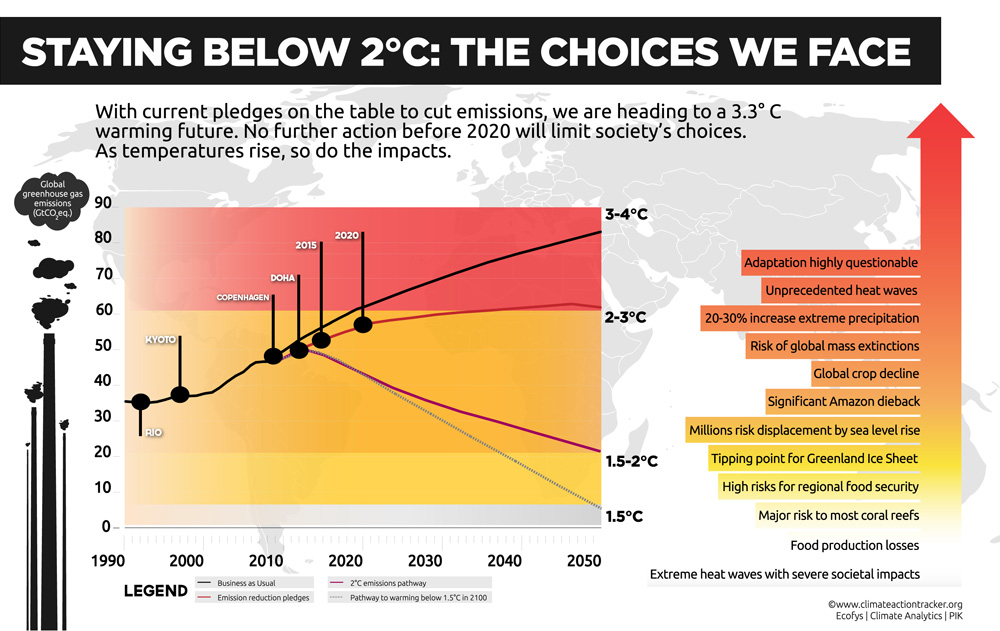 Last Tuesday, Obama spoke out for a few parts of any possible agreement reached to be legally binding, believing that global security depends on decisive actions to slow down global warming. And a few large international companies - Ikea, Total, Unilever, Patagonia, and more - spoke out and stated their commitments to cutting carbon emissions. This is big! Wednesday’s sessions made oceans and other water resources the focus. The UN warns that failure to manage water resources hurts attempts to reduce poverty and reach goals to sustain resources. There are thousands of people marching and protesting for real action, but frankly the real action isn’t happening. It cyclically keeps coming back to the question: who pays, how much, and how often? All the while groups are trying to make the answer to the question not be about themselves.

For now, check out this interactive website that allows you to see the change in different environment-saving techniques.

And now, what better way to hear  the logic and end the article than through one of the world’s leading climate scientists, James Hansen?


On the current Paris conference:

"What I am hearing is that the heads of state are planning to clap each other on the back and say this is a very successful conference. If that is what happens, we are screwing the next generation, because we are doing the same as before. "


"[A rise of ] 2°C is definitely dangerous. We are at the point now where temperatures are hitting the 1°C mark and are are on a path above 1°C. Even if we reduce emissions 6% a year we will still get 1°C... We are asking each country to cap emissions, or reduce emissions. In science when you do a well conducted experiment you expect to get the same result. So why are we talking about doing the same again? This is half-arsed and half-baked."


"The problem is fossil fuels are cheap and as long as they remain so they will be burned. They do not include the effects of warming and air pollution on human health. Studies show that if you added $10 a tonne to the price you would reduce [fossil fuel] energy use by 20% in 10 years, and 50% in 20 years. This is the only viable international approach. You cannot ask 190 countries to individually limit their emissions. The price of fossil fuels must be honest. That just needs a few of the major players. It would rapidly move us off fossil fuels. It’s not too complicated. It’s not that the problem cannot be solved but that it is not being solved. We need an honest, simple rising carbon fee."


Please check out my article about the best solution to climate change we have to far! And remember, don’t be trashy!