Turf Wars: Is it worth the cost?

By Ben Pontz - November 09, 2015
Next week, the road to turf at Lampeter-Strasburg begins. On November 16, school district officials will meet with leaders at the Hempfield School District on how turf has affected their athletic program. It is the first of five proposed steps in a recent presentation to the Lampeter-Strasburg Board of School Directors on the efficacy of turf, and the master plan for athletic field renovation. Although turf is in the discussion, it is not a done deal by any means.
"Currently, we are in a discussion phase and nothing more has been discussed with the school board, but there should be more information to come in the next few months," says athletic director Branden Lippy.
The final decision will be made by the School Board, and could come as soon as May 2016. Conversations on the future of athletic facilities at L-S began with a site audit conducted by Architerra P.C. that was presented the the Board's Buildings and Grounds Committee in August 2014. That report concluded there were four main issues that pervaded the District's field situation: poor soil quality, athletic field overuse, aging surfaces, and insufficient quantity of fields. 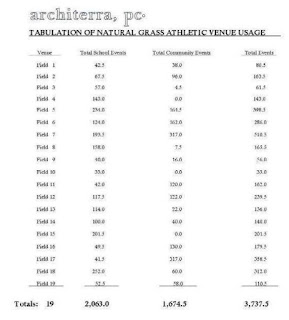 This is an average of 197 events per field, which is almost four times the number of events recommended to be held on a grass field. A grass field can withstand about 55 events per year before noticeable damage occurs.

Injuries associated with grass surfaces consist of knee injuries and head trauma such as the possibility for concussions, whereas injuries associated with turf surfaces are more along the lines of muscle tears and ankle injuries. Although different injuries are associated with both fields, the more severe injuries are more commonly associated with grass surfaces.
Many student-athletes at L-S deride the field quality, and share their concerns that the fields contribute to injuries.
"I actually broke my ankle on the field, and I had to miss a lot of soccer games because of it," says soccer player Matt O'Neil.
Another active athlete, McKenna Kimmel has concerns about how the accuracy the length of grass affects the game.
"For field hockey and lacrosse it is key to have short, maintained grass to have better ball control," she says.
When the grass is not maintained to a uniform length, the games can become more physical, and raise the potential for injury.

EFFICACY OF TURF
Turf comes with many intrinsic benefits that primarily center on three categories: environmental, safety and accessibility, and use potential.


Virtually unlimited use ... for around a decade
Overall, a turf field can last up to 12 years, especially when school districts engage in maintenance practices that can prolong the lifespan. Generally, the lifespan of a turf field surpasses the lifespan of grass turf: “[A] synthetic turf field is warranted for a period of eight years. The surface will last eight to twelve years."

Manufacturers have found that the infill used with synthetic turf fields is lasts about 12 years, around which point it needs to be replaced. Many school districts have taken extremely good care of their to prolong their lifespan, and it has resulted in some fields lasting almost 20 years.

The real advantage of adding a turf field is the use potential, especially in comparison to grass fields.

“A synthetic turf field equals minimally two natural grass fields," the presentation postulates. This would provide a plausible solution for the extreme overuse of the districts’ fields, by doubling the amount of usable fields without a restriction for maximum number of events to be held -- it is time, not use, that wears a turf field.

"It is time, not use, that wears a turf field."

Safety and Accessibility
Resilient materials constitute synthetic turf, which lowers -- but does not eliminate -- the risk for injury. According to a study the NCAA conducted in 2004, researchers conducted a comparison of turf injuries and grass injuries, and the results showed turf was slightly safer: "The injury rate during practice was 4.4% on natural turf and 3.5% on synthetic turf." Much additional research has corroborated that finding: turf is somewhat safer than grass.

Additionally, any field renovations at L-S would lead to improved accessibility, bringing L-S into full compliance with the Americans with Disabilities Act (ADA). Such improved accessibility could lead to more spectators able to support L-S student-athletes.
Presently, many of the fields around campus are rather uneven and a risk for a twisted ankle if stepping onto a bumpy patch. With the switch to synthetic turf, the ground would become more even and easier for people of all ages to walk upon. Synthetic turf has become increasingly prevalent at retirement homes and communities, because of its stability, which ably supports walkers, canes, crutches, and wheelchairs.

One field can save up to a million gallons of water
The positive environmental effects of turf are two-fold: reduced water consumption and improved air quality. According to the Synthetic Turf Council, "One full-size synthetic turf sports field saves 500,000 to 1,000,000 gallons of water every year." After rainfall, the runoff from fields carries many pollutants including pesticides.


Also, keeping the grass lush and full requires strict maintenance of both the length and edging of the grass. This requires lawn mowing, which has adverse environmental effects.
"Lawn mowers emit high levels of carbon monoxide, a poisonous gas, as well as hydrocarbons and nitrogen oxides that contribute to the formation of ground level ozone...that impairs lung function, inhibits plant growth and is a key ingredient in smog," says a report from the New Hampshire Department of Environmental Services.

Documents appear to show that the District and its planners are cognizant of the potential improvement of field maintenance for which synthetic turf allows, but not necessarily the environmental effects. Regardless, the presentation suggests maintenance strategies including adding limestone to the fields to reduce the acidic levels -- by adding limestone is creates a greater pH level in the soil, which can help to successfully grow plants, such as grass -- applying pre-emergent weed control, use more water on the fields, and alternating heights of the lawn mower blade seasonally.

Although there are many benefits to having synthetic turf, the cost is, by far, the biggest sticking point. The amount of money replacing grass fields with turf fields will cost is a dramatic increase, although turf fields can foment significant new revenue opportunities as well as savings on maintenance. Presently, the District spends $16,551.00 annually on field maintenance, which includes labor, lawn care, and weed controls. Although Lampeter-Strasburg has a considerably lesser budget for field maintenance -- the highest in the region is Central Bucks West with a budget of $40,650.00 while the lowest is Kutztown Area at $15,437.32 -- L-S fields host more events annually than either district, which again accentuates the underlying overuse of fields.

In November 2014, Architerra recommended to the District a four-stage revamp of athletic facilities. The most noticeable aspect of the plan could occur in time for the 2017-18 school year as part of the third stage of field renovations, and would be a project that would renovate the football field by adding synthetic turf as well as other updates that would transform the space into a field that could be shared by multiple teams. The total estimated cost is $1,526,500. Although there has been some suggestion that Booster Clubs contribute towards that cost, the District has not yet made such a request, and ostensibly would pay for such a project with funds reserved for such capital projects.
A fourth stage to occur around 2022-23 could include a $2,000,000+ project to revamp the soccer fields, as well as add lights to the softball fields. However, such discussions remain highly preliminary.

Whenever such large sums of money are involved, the School Board moves with a deliberate pace, as it should, but that certainly does not quash enthusiasm for amelioration in field quality.

"I would like to see it happen because I do see the benefits of the turf, such as not having the deterioration caused by the overuse," says principal Mr. Eric Spencer.
The decision ultimately resides with the school board. Many are hopeful they say yes.