By LS Pioneer News - November 13, 2015
All this week, morning announcements at the high school invited students to attend a "human game of Clue", also known as this year's fall play, Rehearsal for Murder. All told, 194 people -- a nice cross section of students, teachers, administrators, and community members -- took advantage of the offer, and witnessed a strong production of a modernized murder mystery.

Sworn to secrecy, the cast and crew did not reveal to anyone who the real killer was, and at intermission, the audience was invited to take out their cell phones and vote, watching live results on the screen. Overall, 27% of the 101 people who voted thought the reclusive janitor known only as Ernie -- portrayed by Logan Emmert, the cast's sole freshman -- was the killer. Although we won't give away who the killer was, we will say that the show certainly had an "O. Henry-esque" surprise ending, well worth coming out on Friday or Saturday at 7 PM to investigate for yourself (tickets are $5 and are available at the door or in the high school office). 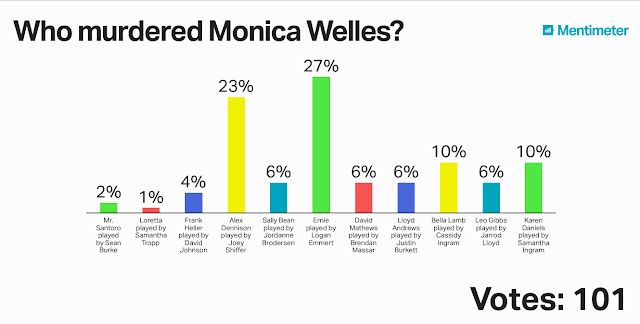 Back to the stage this evening, junior Joey Shiffer portrayed protagonist and playwright Alex Dennison, his first leading role in an L-S production. An occasional touch of excessive zeal notwithstanding, he did a remarkable job mastering the nuances of his leading role, and deftly navigating the deluge of dialogue without missing a single line, according to director Susan Rettew, who complimented Shiffer's work ethic throughout the preparations for the show.

"He was phenomenal," says Mrs. Rettew. "He always wanted to improve."

Aptly described by one of the actors after the show as a "play about a play within a play", there are several flashbacks to the night of Monica Welles' (Ashley Crutcher) untimely demise. In her L-S theatrical debut, Crutcher adroitly navigated the complexities of playing a charismatic dead woman, and demonstrated her theatrical talent.

As with any opening night, there were a handful of production imperfections, but overall, it was remarkably well put together. Backstage, all was "smooth", according to Ethan Bare, a member of the stage crew.

Justin Burkett, who also starred in last year's fall play, Love Rides the Rails, was also happy with the performance.

"They got the lights right, so everything went smoothly," he says.

We would be remiss not to mention the collection of minor characters who also contributed to the show, perhaps most amusingly in the context of the show (come and see it, and you'll get it), the mover Mr. Santoro, portrayed with a New York accent by talented voice actor Sean Burke. Emmert also did a fine job portraying the stage janitor named Ernie. Finally, senior Megan Doolittle made her theatrical debut, and played a police officer investigating the murder along with junior Andrew Lines.

No disappointment from anyone -- cast, crew, director, or spectator -- was evident after the show, and all are looking forward to two more performances. We at LSNews.org recommend you see it too.

See all of Megan Doolittle's Rehearsal for Murder photos