By Ben Pontz - October 09, 2015
In past years, students have traversed to the football stadium the Thursday afternoon of Homecoming Week for a carnival. However, this year because of dwindling student interest and burgeoning work load to execute the event, student council sponsored a pep rally instead.
The L-S marching band attended and riled the crowd as it entered, and then played a different song for each fall varsity sports team as it entered.

Once everyone had entered, it was time to introduce the Homecoming Court. Each pair performed a brief skit with a movie theme. Two social studies teachers -- Mr. Shockey and Mr. Titter -- served as masters of ceremony, and mocked the skits in real time.


Thereafter, fall sports teams participated in a multifaceted relay race, which included setting a volleyball while shuffling down the court, bouncing a tennis ball, dribbling a soccer ball, and a wheelbarrow race. Ultimately, the boys soccer team took down the girls volleyball team in the finals to win. 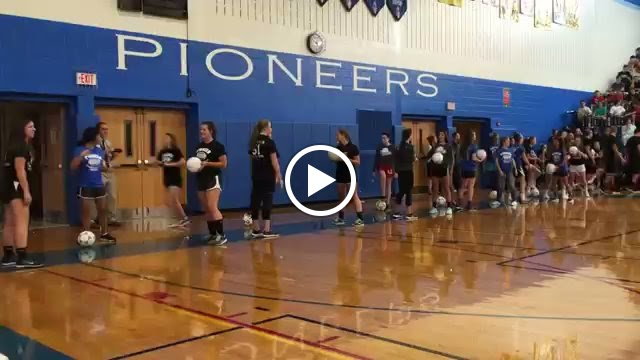 Subsequently, the cheerleaders selected students from each class to participate in "Minute To Win It" themed activities, including the venerable Oreo maneuver. Later, students were tasked with getting ping pong balls out of a tissue box strapped to their waists. Joey Dreer -- emboldened by the football team's "encouragement" -- entertained the crowd with his ... unique ... methodology. 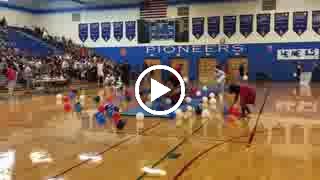 The assembly closed with perhaps its most anticipated event -- the pieing of Mr. Spencer to benefit Mini-Thon. Senior Jared Peck won the drawing to hit the principal with a pie, and after his proposed bargaining to avoid future disciplinary action was met with a "bring it on" from the confident administrator, Peck did just that. Unfortunately, the pie did not seem terribly conducive to hitting someone in the face, as there was no cream. Nevertheless, it was a memorable moment for the student body, as was the assembly at large.
LSNews.org Co-Director of Photography Ashley Crutcher took dozens of photos, which are compiled in this Picasa album. Other LS News images and videos of the pep rally can be found here.