In this installment of In My Own Words, Gabby Harner talks her visit terrifying clown filled trip to Field of Screams.

On Friday, I went to Field of Screams with my family and a friend. We were both nervous having never done something like this before. We got our picture taken before entering. 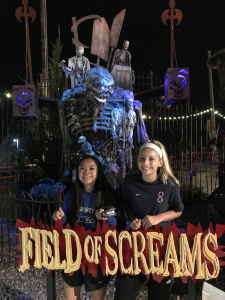 Almost immediately an actor dressed up as a clown came up behind my friend Sam and scared her! Sam hid behind my mother as the clown started to come after her.

After that, we walked around and got pictures with a few props and actors. We then tried out one of the events: The Haunted Hayride. The hayride drove through a corn field, and stopped a few times under small buildings where doors would close and actors would pop out to scare people. A few times they also had stuff dangling from the ceiling. They even had people with chainsaws come after you!

After the hayride, we then went into the Haunted Asylum. Inside we had to walk around where props, actors, and objects inside walls would pop out and scare you. At one point, we also had to crawl in completely dark rooms. When we were exiting the Asylum, a clown chased us with a chainsaw!

While walking towards the next event, a man was sprinting around the park with a actor chasing him with a chainsaw. It was really funny!

We walked inside the next attraction: Den of Darkness. This event had a basic theme of a haunted house. Actors would follow you, props would touch you, and chainsaws would come after you!

Out last attraction for the evening was the Nocturnal Wasteland. The attraction's theme was that of a wasteland with hunters tracking down people and branding them.

We were having a blast by the end of the night. I highly suggest going to Field Of Screams if you love getting scared or love Halloween! It’s really fun to do with friends or family. Here’s a link to their website!