By LS Pioneer News - October 25, 2017
The game started off slow with few chances for either side to score. After 15 minutes of play into the first half, the Pioneers began to dominate the game with lots of chances to score. Finally Chase Petersheim received an amazing pass from Nate Erb that lead to a goal. This gave the Pioneers a 1-0 lead. 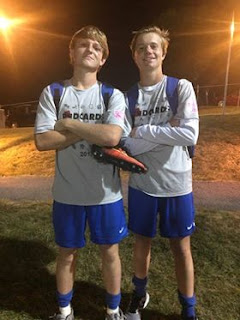 In the second half, the Pioneers scored a quick goal by Derek Eckman off a header to make the score 2-0. Then a couple minutes later Nate dribbled past one player and  was fouled. He was awarded a penalty kick. Nate stepped up and scored a beautiful penalty into the upper right hand corner making it 3-0.

The remaining few minutes of the game Twin Valley was able to score once. When the dust settled, the final score 3-1.

GOAL, Lampeter-Strasburg. Nate Erb cashes in on the PK to extend the Pioneers' lead to 3-0 over Twin Valley.in the 40th minute. pic.twitter.com/VdQuQXGXQs
— Tim Gross (@TimGrossLNP) October 24, 2017

Come support the Boys Soccer as they take on Greencastle-Antrim in the quarterfinal match on Thursday at Boiling Springs.