In this installment of In My Own Words, Kiley Turner discusses the final push in preparing for this year's fall play which opens next week.

The Lampeter-Strasburg High School’s production of The Somewhat True Tale of Robin Hood debuts on Thursday November, 9. I’m currently involved in the production where I play the role of a fawning lady.
This is an amazing opportunity, and I’m beyond grateful especially because of the fact that I am only in ninth grade. In fact there are only four freshman in the whole show. That''s a lot more than last year which only saw one freshman, Caroline McEligot, in the cast.

With only three rehearsals remaining, we’re in total crunch mode. All the sets pieces are finally finished. The Evil Prince John's (booooooo!) seat of power has become the the center of attention as it is a replica of the Iron Throne from HBO's smash hit Game of Thrones. 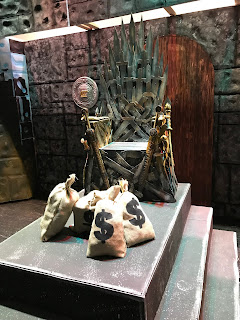 Here's another reason to come and to arrive early. You can even have your picture taken sitting in the Iron Throne.
With a marathon seven hour practice on Saturday, there's no doubt that it's go time.me. The director and high school English teacher, Mrs. Susan Rettew told us last night, “We’re in the nit picky phase of the show right now. If we’re in this phase with three rehearsals left, we’re in good shape.” 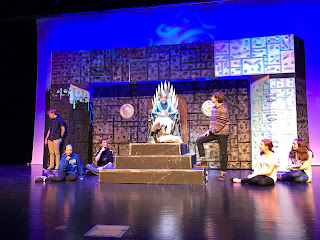 This builds a lot of reassurance and lets us know as actor’s that we’re on a good route to show time.

We perform teasers for both Lampeter, Hans Herr, and the high school on Wednesday, the day before opening night. This is a big deal because it’s like a practice performance before the real thing. It lets the cast, crew and director know what needs to be done in order for the show to run smoothly opening night.

This is my first play I’ve participated in, and the actor’s, crew, and director make me want to come back next year. This has been absolutely the best experience this year.

If you’re into myth, lore and legend, I highly suggest coming to visit Sherwood Forest November 9-11. Now excuse me while I fade out into tomorrow’s practice. Good day good folk of England! And remember, long live the king! 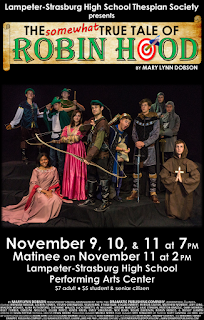 Ticketing Information
With less than two weeks until the show opens, tickets will be on sale starting tomorrow, Monday October 30.

Tickets are $7 for adults and $5 for students and senior citizens. Open seating tickets can be purchased in advance in the Lampeter-Strasburg high school main office 2-4 pm starting tomorrow through Friday, November 10. Tickets can also be purchased at the door prior to all performances one hour before the show.


In My Own Words is a first person written series that highlights Lampeter-Strasburg High School students activities.