By LS Pioneer News - October 27, 2017
Book Review
Before school started, I went to Barnes & Noble to get a few books from my favorite author, S.E. (Susan Eloise) Hinton, to read as the year started. I got That was Then This is Now, Rumble Fish, (a third copy of) The Outsiders, and Tex. 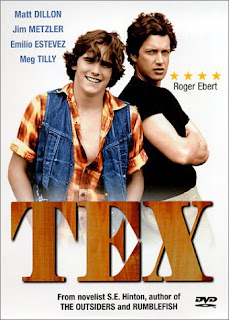 I had already read The Outsiders at least nine times, I had finished That was Then This is Now, and I had just finished Rumble Fish, so I decided to pick up Tex and start reading. The author of these books writes them in the only way I can ever read books. First person point of view with a relatable narrator.

This one was told by the point of view of Texas (Tex) McCormick, a fourteen year old boy who is living with his brother Mason because they’re mom died when Tex was little and their dad walked out on them a few months back.Texas (Left) and Mason (Right) McCormick

Texas believes that Pop (their dad) will be back soon, but Mason knows otherwise…or at least he thinks he does. Tex has a few close friends and is really popular at school and is known for being a troublemaker. The only things that he really cares about are his best friend Johnny, his crush Jamie (Johnny’s little sister), his brother Mason, his dad, Pop, and his horse, Negrito. 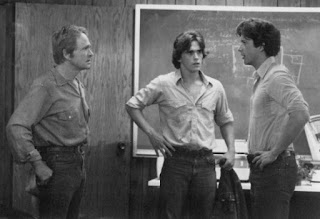 Their dad left them money before he went on the road, but he forgot about them, and the money ran out. Mason had to sell Negrito and his horse to be able to pay for food so he could feed himself and his brother. Of course, since Negrito was one of the only things Texas cared about, he became furious with his brother for selling him, and they got into a fight. Tex said it was the first time Mason had ever hit him.

The story continues as Tex gets into trouble at school and tires to figure out his feelings for Jamie, when Mason gets sick… really sick. He goes to the hospital and finds out he has a stomach ulcer. On the way home, they pick up a hitchhiker, who pulls a gun on Mason and tells them to drive to the Oklahoma state line. Tex was driving, and he didn’t have a choice but to keep going because if he stopped, the hitchhiker would kill Mason. 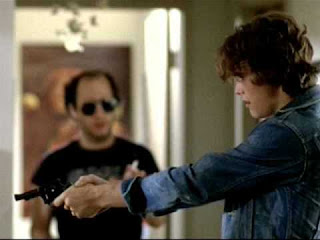 Eventually, a police car starts trailing them, and Texas decides to take a chance and crashes the car in a ditch. The hitchhiker tries to pull Mason out of the car to use as a shield so the police don’t shoot him, but Tex pulls his brother into the car at the last minute. The police start firing as the two brothers keep their heads down in the car. They killed the hitchhiker (who had just escaped prison and murdered two people) and a news crew shows up.

That night, Tex and Mason watch themselves on TV. There is a sudden knock on the door and they open it to find Pop there. He said he’s seen them on the news and it made him remember them, so he came home. Mason was furious, but Texas was on cloud nine. Mason knew he wouldn’t stay and he didn’t really care about them, but Tex seemed to be oblivious to the cold, hard reality of real life, and not his imagination.

Eventually, it’s testing day at Tex’s school (almost like Keysones but for Oklahoma highschoolers in the 1960s). They all have to use typewriters and type their papers all day long. Tex was having none of it, so he convinced his best friend Johnny to help him stick caps on all the typewriters that would explode with ink every time they hit a paper.

Johnny was reluctant, seeing as his father, Cole (who was one of the most terrifying people on the planet), already didn’t like Texas for getting his son into troubled in that past. He didn’t like the McCormick brothers because they were poor. Cole’s family wasn’t rich or anything, but they had more money than the McCormicks, and he was embarrassed for his son to be seen with them. 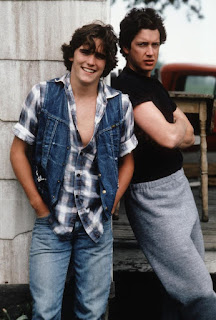 If Tex got Johnny into any more trouble, Cole was going to keep them apart. Even so, Johnny decided to help his best friend out. As soon as the test takers started typing, the caps started exploding on all the typewriters in the room. The two boys tried to act innocent and confused, but it was too obvious that they were trying not to laugh, and they got sent straight down to the office and where suspended from school for a few days.

Cole showed up to pick up Johnny and gave both of the boys a stern lecture, until Mason came down to the office. Mason was still in highschool with Tex, and he was the star of the basketball team. He told the woman at the front desk that Pop (their dad) wouldn’t be able to come in to talk to them until after school, so he cut class to come ‘address the issue’. He soon saw Cole yelling at both Texas and Johnny, and he started told him off for saying it was all Tex’s fault. Cole eventually took Johnny and left. Mason had to get back to class, so Tex ended up sitting on a bench in the office all day until Pop could show up. Mason came back to the office after school hours to meet him and Pop.

They got into a heated discussion as Texas sat awkwardly, staring at them. Eventually, Mason yelled out that Pop needed to take care of Tex because “he is my brother! Even if he isn’t your son!” The room fell silent as Tex came to understand what he’d said. He wasn’t Pop’s kid. He immediately got up and walked out the door of the school without saying a word, and walked down the street.

He ran into an old family friend named Lem, who he knew was drug dealing to get money to help out his new wife because they had a kid. He said he was going to a ‘meeting’ with a buyer and asked if Tex wanted to come along. He said yes and got in the car. He just wanted to be away from the school, as far away from Mason and Pop as possible. During the deal, something went wrong. Lem and the guy started fighting, and Texas tried to leave. That’s when the buyer pulled a gun on him… and shot him. That’s when Tex took the gun and put it back on him.

Lem eventually talked him out of shooting the guy, and left Tex out on the street by himself. He called Jamie (Johnny’s sister) and told her to call Mason to come get him because he’d been shot. Jamie immediately went into hysterics and called Cole (her and Johnny’s dad who doesn’t like the McCormicks) into the room. Cole started talking to Texas and asked where he was. He told him, then passed out. He woke up in the hospital and barely remembered anything. Mason had to explain to him what had happened… then Pop came in.

They talked for a while, until Tex asked if the reason he always payed more attention to Mason than to him was actually because Mason was really his son, and Texas wasn’t. He didn’t want the response he got. He wanted Pop to say that it was just because he was older, or because he got into more trouble than Tex, but he didn’t. He just said that it was… Pop cared more about Mason than him. He’d always known this, but to hear it out of his mouth hurt.

The book ends with Tex getting out of the hospital, and going back home. He and Pop got along alright, even though things would never be the same now that he knew that he wasn’t his son. He and Mason decided to go fishing like the used to when they were younger, and the last page of the book closes with him and Mason getting ready to go to bed the night before they were to go fishing.

The story had many different meaning wrapped within it. Mostly about love, family, and understanding, but to me, it seemed to be more about growing up and accepting the things that you can’t change. Tex matured throughout the book, you could hear the difference in the narrating from the beginning to the end. As Texas said, ‘there are people who go places and people who stay’, and I guess it’s your decision of which to do that defines you from everyone else.