By LS Pioneer News - October 27, 2017
On Friday, October 13, was the anticipated homecoming game, where the stands are packed and the hunger for a win is at its peak. We are to play E-Town, a pretty solid football team and a ginormous marching band. I remember their routine from the coalition; their drum majors performed a complex dance before the show started which ultimately ended in all three doing a split.
Unlike most home games, we are doing the half-time show. I am a little bummed that we weren’t doing pregame, but half-time also has its perks. During halftime, all attendees are already in the stands, so we have a larger audience.

As the band settles into the stands, the E-Town Marching Band files onto the field. Now, I notice that their band is even larger that I thought. There are at least ten flutes, where our band has only five. Although having a bigger band is great for stellar visuals, it is hard to manage a great amount of people, especially if they are easily distracted, talkative high schoolers.

Although everyone is excited for the game, we aren’t thrilled about the weather. It rained the past few days, but it seemed to have let up for the game. Thankfully, it isn’t pouring, but it was drizzling and misting the stands. The metal benches are freezing, so I use my rain jacket as a blanket. Some people in the band are smart, bringing cozy blankets to huddle in while we aren’t playing. At least I know to bring one the next game.

After watching the show, we file back out of the stands to play our national anthem and Alma Mater. As we arch up to play, we piccolos hide our instruments under our jackets; even a little bit of rain can destroy a woodwind. We play the songs, remembering to accentuate the first notes of each phrase.

We walk back up to the stands and settle in for the game. The first half goes relatively well; to be perfectly honest, I pay more attention to E-Town’s band than the field. Another perk of having an E-Town sized band is the full sound. Each song they play projects directly to us. Their sound is beautiful, but each song they play is approximately three or four minutes long! It is incredibly rude to play over a band, so we just sit and wait for them to finish. By the second quarter, we decide to break the band etiquette. It is our house after all, and we need to play at least a little bit. We only play our fight song when we get a touchdown and the Jeopardy theme during time outs when they are playing to not be terribly inconsiderate.

Before the halftime show, we are to play the Alma Mater as the homecoming court is introduced. Last night, Thursday, was the powder puff game, where the Homecoming King was crowned. Our own Steven Greenwood, a trumpet, won! Now, we are eager to hear who the queen will be.

As all the queen candidates walk down the fifty yard line, we arch up and play the Alma Mater over and over and over until everyone is introduced. It is tedious, but it serves as a way to perfect the tune. We play the Alma Mater around ten times then scurry to opening set. We stand in ready as they announce the queen: Cheyanne Waller! We cheer with the crowd since most of us know her from being an incredibly active member in theater and music. 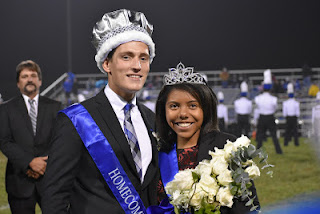 Our show goes very well. We hit all over our sets and project our sound. The only thing that took some getting used to was the field. After it rained a couple of days, our field turned into mud. At the end of the show, dirt spatters covered my shoes and pant legs. 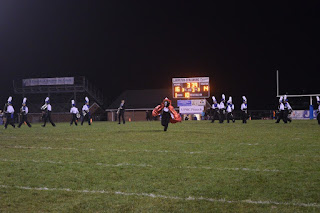 After returning from our third quarter break, I realize how close the scores are; this win must be ours, especially during homecoming. We all analyze the game, cheering extra loud and proud. The end of the game looked to be a tie, but our team goes for a kick; and it goes through! The stands erupt in cheering. I look to the score board, eager to see our score bump up as the time hits zero. As I watch the board, I hear the call: the kick is not good. We collectively gasp. I saw it go through with my own eyes! How isn’t it good? After we gasp, we start to boo. 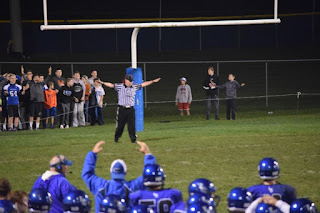 We go into overtime, and it doesn’t go very well. I am so confused by the call on the kick that I barely notice when somehow E-Town scores a touchdown, leaving the score in E-Towns favor, 44-38. A plague of confusion and sadness sweeps the crowd. The student section does what it does best: express the feelings of the crowd by chanting loudly. I refrain myself from joining in.

Although we lost, I personally refuse to consider it as one. I saw that kick go through- I saw us win that game! The scores may not show it, but in our hearts, that is another tally to our winning streak.