The First Coalition of the 2017 Season: Best Way to Spend a Saturday

By LS Pioneer News - October 02, 2017
This past Saturday, September 23, was the day I heard about ever since I joined marching band: our first coalition. A coalition, the replacement of a county-wide competition, is where most schools in the area come together to bond, encourage, and enjoy other bands and their shows. These were created when some schools in the area, including L-S, decided it is better to not compete with each other but to support. There are three coalitions this season, and the first one was a short drive away at Lancaster Catholic.

Before the coalition, our band meets at noon to practice and touch up a few areas to ensure perfection. We micromanage many sets, making sure our tempo doesn’t drag and that our timing is correct. It is tedious and tiring but definitely worth it; I feel much more comfortable with the fourth part after the practice than I did the night before.

At three o’clock, we pack up our instruments and devour meatball subs and mac-n-cheese in the school cafeteria. As we eat, a list forms of players in the game Murder, a marching band coalition tradition. You sign up for the game during the lunch period, and afterwards, between the time that you leave lunch and get off the bus at the coalition site, you receive your target to ‘kill.’ To kill someone, you must lure your victim at least five feet away from any other person and quietly whisper in their ear, “you’re dead.” They should willingly give over their intended target, which becomes yours. The game continues until there is one remaining. Games can last anywhere from one day to six months, all depending on the strategy and swiftness of the playing.

As we herd off the buses into the dusty Lancaster Catholic, I make sure to stay close to my friends to avoid ‘death’. Our show is second in line, so we suit up in our uniforms, plume and all. I try to ignore that my uniform is still a little damp from the humid game at Manheim Central. 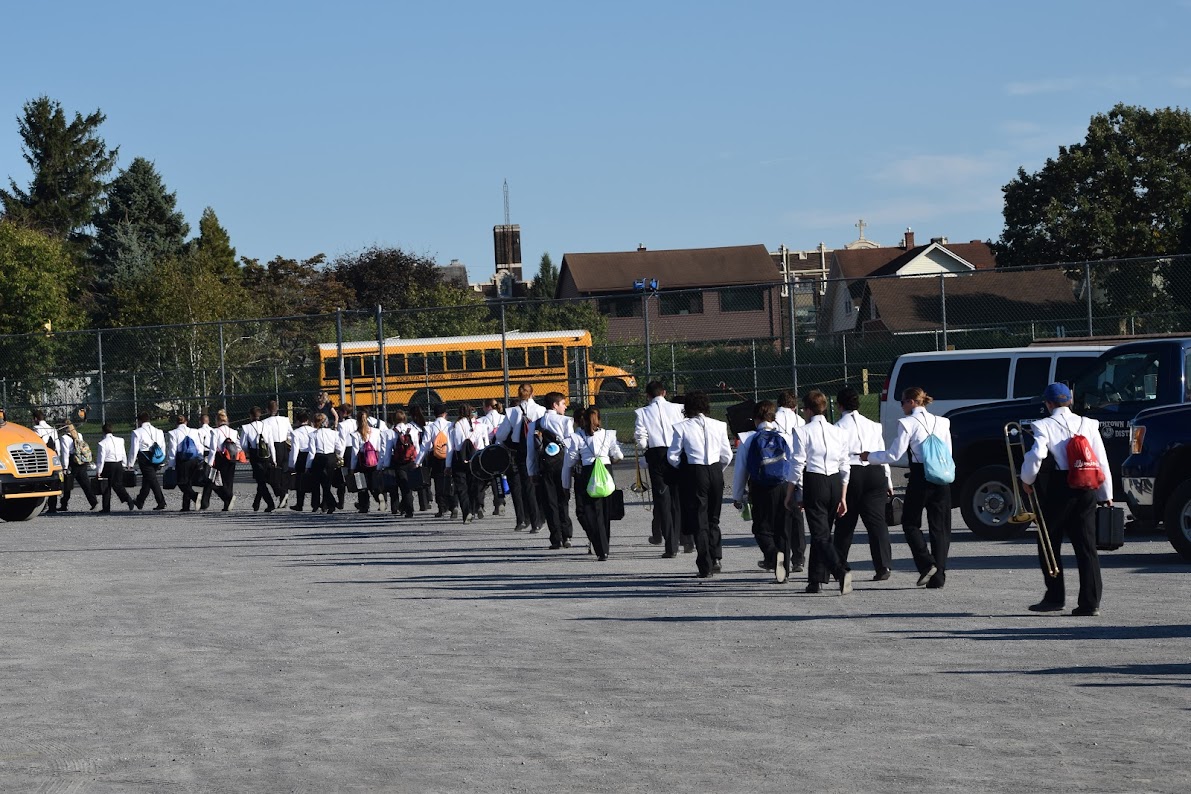 We line up behind the visitor stands, overhearing Cocalico’s show and trying to calm our nerves. I silently coach myself as I hold the folded tarp, replaying the fourth set in my head on repeat as if it is my favorite song. Then suddenly, our band director calls us forward, and the adrenaline accelerates.

As our show program is announced across the stadium, we march onto the field. I can’t help but admire the quality of Lancaster Catholic’s fresh turf. I recall that the stadium is brand new, built last year. After I carefully set the tarp down on the turf, double checking that the handles are on the right side, I hustle to opening set with my piccolo pals, chirping positive encouragements to each other as we bow our heading into ready. I blankly stare at my feet, waiting for the call for attention. It never came. Suddenly, the high-pitched echo of a disturbed microphone vibrates through the stadium. I cringe as I do my best not to move my feet; the audience has a more likely chance of picking me out if I move during a hold.

About a minute or two later, the speakers are seemingly fixed, and we start the show. Pure nervousness paralyzed me during one or two sets, but in the grand scheme of things, we did an incredible job performing in our first coalition of the season. 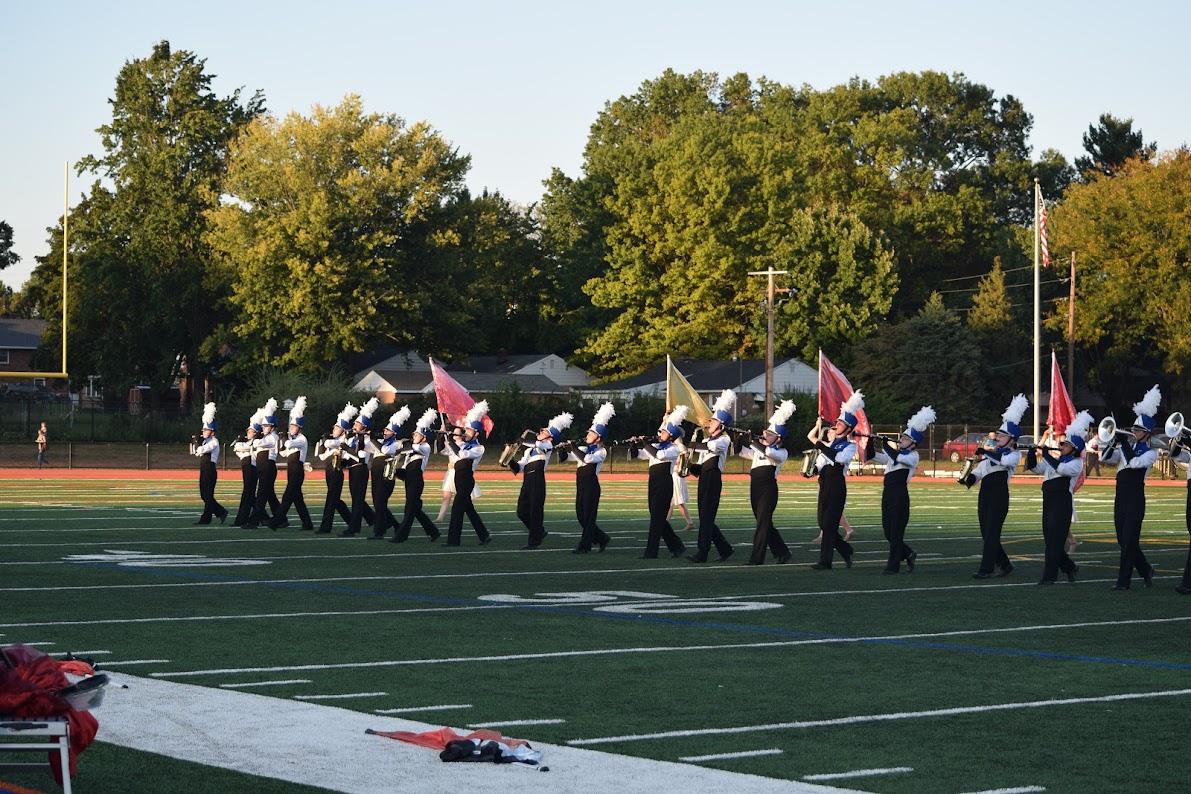 After our show, we drop of our instruments and jackets off at our storage area and filter into the stands to watch the rest of the shows until intermission. All of the bands do a fantastic job, each with an original theme and energy. From some of the upperclassmen, I hear that the school that is really awesome is Owen J. Roberts. I know of the school, but I have no clue what to expect. They perform after the intermission, so I take a mental note and keep watching the shows.

Intermission creeps upon us, and we all jump off and sprint to the food, not before pairing up to save themselves from their ‘murderer’. I do the same, desperate to find the source of the french fry aroma, staying close to my friends.

During intermission, it is a bloody battlefield. Whenever I hear the faint echo of a scream, I nod my head solemnly, knowing a fellow band mate as been murdered in the hands of a friend. I weep a single, heartfelt tear in their valiant honor then continue stuffing my face with more french fries.

As intermission closes, I remember Owen J. Roberts and their legacy. I ponder of all the themes they may have and the different illusions and funky footwork they would’ve incorporated. As I imagine, a peppy invigorated voice announces their band and show.

Owen J. Roberts’ band is ginormous. There has to be at least a hundred kids, all with glistening horns and fluffed plumes. Their composure and unity may be enough to intimidate anyone, but their appearance is nothing to their sound and sets. The brass is full and astounding, and the pit is harmonic and groovy. Their footwork and visuals are of nearly professional grade. My jaw drops as I watch the precision and accuracy. I overhear on of our trumpets declare, “I would sell my soul to be the worst trumpet in their band!” After a rock-solid performance, they march off the field in victory. I can’t help but think that in this moment, I am truly thankful that we don’t compete.

Well, that takes a chunk out of my ego.

I block out the confidence-deflating feelings and happily watch the rest of the shows. I try to keep my cool, knowing that the march-off is up next.

The march-off is the newest addition our coalitions. This coalition is the first time we ever had a march-off, so how it will be organized and carried out is a mystery to all of us. Each school that participates may elect at most twenty competitors to march, and I happened to be one. How I, a self-proclaimed clumsy freshman, even got into the top twenty is beyond me. I just hope it isn’t as intense as I imagine.

We put only our jackets on for the march-off, neglecting the hats and gloves. We filter onto the vacant field with the rest of the schools and ‘warm up’. We obnoxiously yell our school’s fight song (yes, both parts) and pump each other up. I probably looked ridiculous from the stands.

Once the officials have our attentions, they organize into rows, putting us next to people from other schools to avoid cheating. We have a trial run, which is simple enough, and then the competition begins. I stay in for about three rounds, but I get out by making a false start. I am sour for a few seconds then congratulate myself for making it so far. The winner of the march off is a girl from Hershey, and she is carried off the field by her band mates like she scored the winning touchdown. 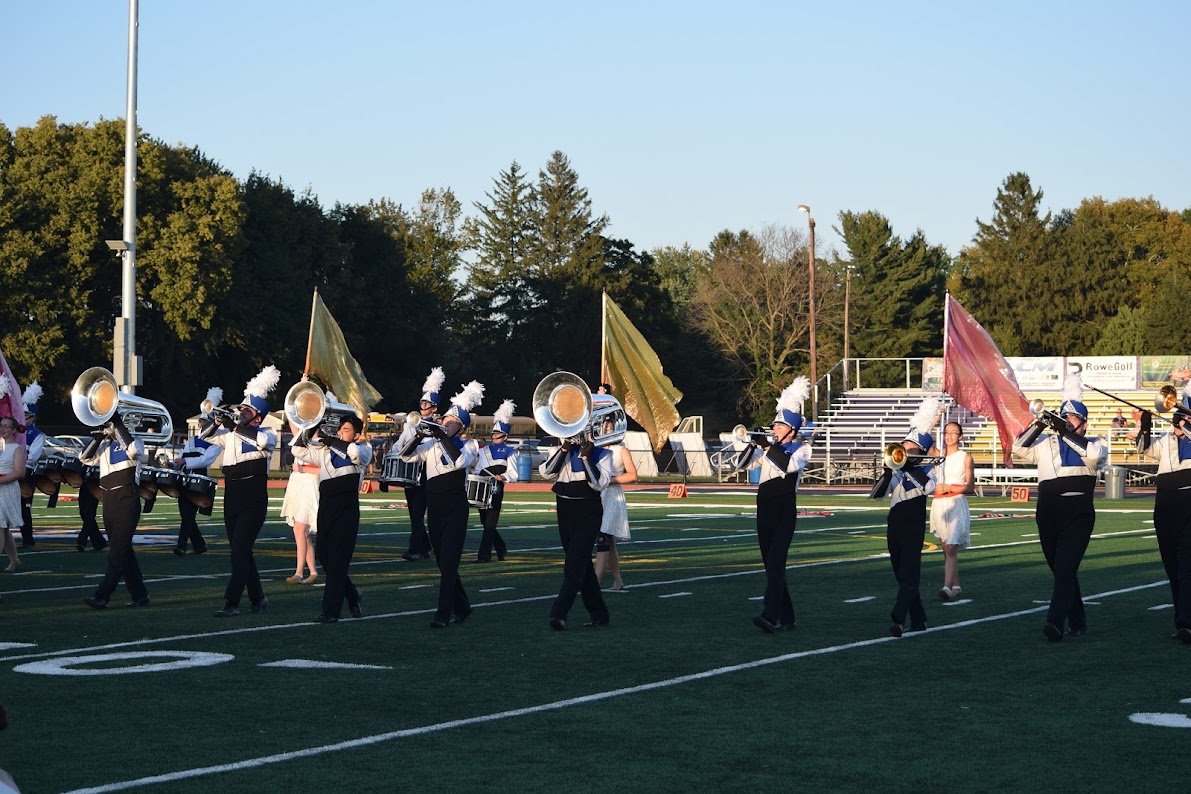 As everyone leaves the stadium, I walk back up to the stands to receive my things. I made a mistake: I was alone, and I was killed. In my first game of Murder, I die in the first day! Unbelievable.

We all stroll back to our storage zone and load it all back on the buses, not without playing some stand music in the process. It was a long, awesome day, and now I understand why everyone was so hyped. I wouldn’t have wanted to spend my Saturday in any other way.

Come support the Lampeter- Strasburg Marching Band at our next coalition at Ephrata High School on October 21, 2017!