By LS Pioneer News - October 27, 2017
Last Saturday, October 21, the Lampeter-Strasburg Marching Band cheerfully anticipated our next coalition at Ephrata High School. A coalition is a replacement for a competition in marching band (read more here). This time, only five schools meet, including Cocalico (whom we played the night before), York Suburban, Garden Spot, Ephrata, and ourselves.

The day is perfect for a coalition. The warm sunlight beams down on us, and a slight breeze blows past us consistently. Before dinner, we have a three-hour practice to make sure everything runs smoothly. Although the weather is perfect, I did not prepare for the heat. Of course, merely standing outside, it is heaven, but when marching on dark pavement in black shirts, it is a different story. I run out of water in the first hour. Thankfully, parents brought coolers of water bottles, so I don’t go thirsty. Some people didn’t even bring water with them to practice, assuming the same I did.

The practice is less than pleasant, but we improve a great amount, ironing out wrinkled and undermined sets that we blew through before. After practice, we run to the cafeteria for dinner. We devour tacos and beans, knowing we may not have time to eat during intermission. We also sign up for our next game of Murder. I hope that I last at least past the coalition next time.

We load onto the buses and head to Ephrata. We are the fourth performance, the first show after the intermission, so we miss time to socialize. As we load off our instruments and equipment, I talk with my friend as we walk to the field… and she kills me. Oh, the humanity! I have never felt such betrayal in my life! What agony, such pain…

As I mourn my own death, we prepare to warm-up and set up our instruments. It is important to have your jacket and hatboxes neatly organized, for it sets an example for your band. It is the first thing other bands see when they arrive, so we need them to know that we mean business. The drum line makes a statue with their drums, jackets, and hats. I have to admit; it is pretty cool. 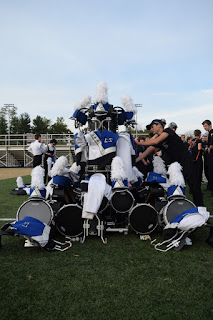 After organizing, we make our way to the stands. We sit in our taped off section right before the first band, York Suburban, is introduced. The announcer makes the mistake of saying that there is a twitter hashtag for the coalition, and she reads some tweets aloud. Our band jumps on the idea, giving embarrassing shout-outs to one another and calling out Mr. Royer for not incorporating a drum break in the show.

We watch Cocalico and Garden Spot and then go to intermission. We mill around for a few minutes until it is time to meet and warm-up for our show. We assure each other that this will be the best show yet. We practiced so hard today, so this has to be awesome! We line up at the end zone and march onto the field to our cadence.

The show feels right. It feels a little bit different than usual, like something clicked today that I didn’t realize. I feel more determined and focused, attacking my sets like a lion. I don’t know what happened during practice, but I like it. After the show, Mr. Royer confirms that today is the best show yet, but I know that next week, we will do even better. 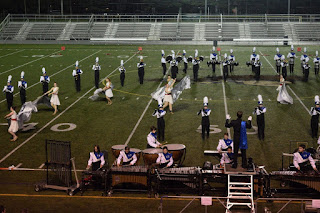 After Ephrata’s finale show, it is time for the grand march-off. This time, it is being run a little differently. There are march-offs by grade, then the finalists of each grade will be in the championship. The winners receive the Golden Dinkles and one hundred dollars towards their band. Dinkles, for those who are unsure, are the brand of marching band shoes our band uses. They are used nationwide and internationally. These shoes, however, are shining gold and placed on top of a hat.

In the freshman division, I lose step at about the halfway point and am eliminated. The pressure, although it is merely a simple march-off, is unbelievable. I hope that my surviving band mates overcome the atmosphere without cracking.

After all the grades were narrowed down, the championship begins. L-S has great representation on the field, blue and white poured across the field. The marching blocks grow smaller and smaller and smaller, until there are a few people left: everyone from L-S except one. The odds of winning are extremely high, so our whole band crosses our fingers and toes that this goes in our favor. The announcer calls the next set, and we are off. Suddenly, the lone, brave girl from Ephrata stumbles. Our band collectively gasps: We have won!

Once the sets are finished, we storm the field, surrounding our surviving friends and cheering. The announcer, her voice joyless and stern, explodes from the speaker.

“L-S, if you don’t exit the field immediately, you will be disqualified!”

We momentarily panic and scramble off the field as quickly as we came on. We jitter in place, waiting for the winner to be called. The three people left march on to find the single winner. After a set where it was hard to tell who did it correctly, the announcer crankily gave one the Dinkles hat and the other the sash. 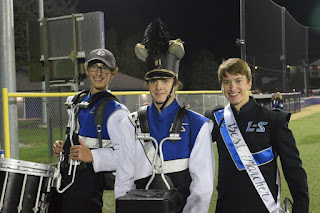 We leave the coalition feeling pride and excitement. In all ways possible, this night has been one to remember. It can only get higher from here.

Come support the L-S Marching Band at our final coalition of the 2017 Season October 28 at McCaskey High School. The performances start at 5 pm, and L-S performs at 7:30 pm. I would love to see you there!