By LS Pioneer News - April 18, 2019
On this past Tuesday, the Lampeter Strasburg Lacrosse team scored a victory against the Garden Spot Spartans Lacrosse team.

After already facing Garden Spot a few weeks before, the Pioneers knew what to improve on in the following game. However, both teams were thirsty for a victory in the Lebanon League. In the first game, the Pioneers gained a lead and managed to keep the Garden Spot Spartans at bay. The Pioneers ended up winning this game. 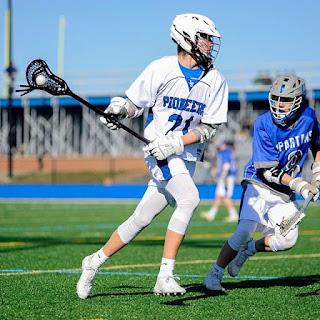 In the second game against Garden Spot, the Pioneers started the game off strong and put up one goal after another. After a 12 minute quarter of solid play, the Spartans tried turning things around.

The Garden Spot Spartans managed to possess the ball for most of the second quarter, allowing them to put up a few goals.

As the third quarter rolled around, the Pioneers seemed rejuvenated and ready to play. L-S managed to put up another 6 goals.

Once fourth quarter arrived, both teams were exhausted from a grueling previous 3 quarters, and intensity began to slow down. L-S was not able to put up any more goals.

After a grueling game, the Lampeter Strasburg Pioneers defeated the Garden Spot Spartans; winning 13 to 7.