By LS Pioneer News - March 13, 2019
After a heart-wrenching semi-final round loss at last weekend's Pennsylvania FIRST Robotics State Championship in Oxford, PA, the road to the Detroit World Finals would not be passing through Pennsylvania for OBX Robotics. The rules of FIRST allow teams to compete in other states. Thanks to an early first place qualifying tournament finish in the state of NJ, OBX was granted an invite to return and participate in the NJ State Championship on Sunday, March 10.

After 6 qualifying matches and two semi-final rounds OBX and their two alliance partners were declared division state champions and awarded one of 10 invitations to advance to the world stage in Detroit Michigan for an unprecedented third year in a row...congratulations Lander and FIRST FTC Team 7244!!

The FIRST Robotics World Championship will take place in Houston and Detroit in back to back weeks in April. The season began in August with over 5,500 teams from around the world, 150 teams remain and they will compete in the spotlight of 70,000 FIRST visitors and tens of thousands more watching the live stream on the internet. The Houston tournament qualifying rounds begin Wednesday afternoon April 24th. Navigate to http://www.firstchampionship.org/detroit for specifics. 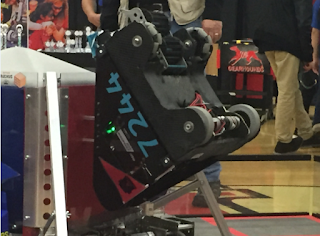 Below Lander pauses before hanging the robot on the lunar lander. Teams are awarded many bonus points if their robot can descend and detach from the lunar lander to go onto further challenges autonomously in the first 30seconds of the match. 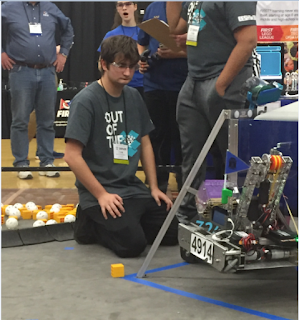 Teams must also present to engineering judging panels and surprise visits with probing questions into robot design and community outreach. Below Lander describes the unique carbon fiber and balsa wood composite frame, robust but light enough to allow the robot to easily hang from the lunar lander. Lander uses Solidworks, and 3-D printing tools to design and build the robot, commercial fabricators from around the community lend their services or make donations. 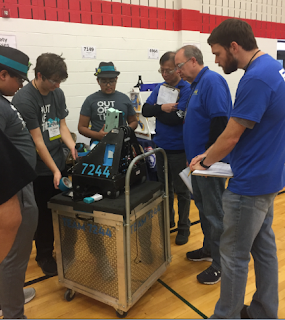 Lander Hollsinger Out of the Box Robotics Robotics