MAWA’s as they are called are a scholastic wrestling tournament series under the AAU organization that starts after the scholastic season finishes with District Qualifiers all over the East Coast of the U.S. If you place in the top 3 at the District Qualifier, you advance to one of 4 regional tournaments (North, South, East, and West).

The top four finishers from the Regional Tournaments meet in a 16 person bracket at the Eastern Nationals Tournament in early May.

Logan placed fourth as the Western Regional Tournament which was held in the Utz Arena in York, PA on March 30. This Saturday and Sunday, after losing his first match 3-0 to another Regional Champion, Logan pinned two wrestlers which put him into the second days competition and in the top 8 which is placing. 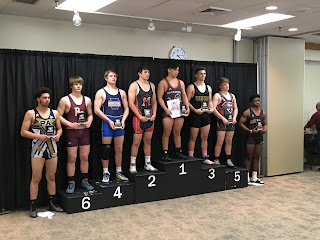 On Sunday, he continued to wrestle well winning his first two matches, each, by a score of 7-4. He eventually lost in the Consi-finals. He finished the weekend with a record of 4 wins and 2 losses and ended up placing fourth at Eastern Nationals…a remarkable improvement over his 4th place finish at the Western Regional Tournament in the Advanced Age Division 189lb weight class.

Coincidentally, his win on Sunday to get into the 3rd/4th place match was over the Western Regional Champ.
Logan Davidson Wrestling