Book Review: The Effect of Gamma Rays on Man-In-The-Moon Marigolds

By LS Pioneer News - May 05, 2018
Here’s a little known book that made it on my favorite book list: The Effect of Gamma Rays on Man-In-The-Moon Marigolds by Paul Zindel. I found this book amidst a cart of free books my school was giving away and grabbed it because the title and cover were cool.

Who doesn’t love a small book that looks cool? There was a short description of the book in the front but I didn’t get what it was about so when I got home I sat down and read it one sitting.

The Effect of Gamma Rays on Man-In-The-Moon Marigolds is a play about a mother named Beatrice raising her two daughters. Her oldest daughter, Ruth is severely effects by reoccurring nightmares and her youngest, Matilda-or Tillie- does her science fair project offstage and pets her bunny.

My copy’s pages are dotted with small drawings of the bunny. Tillie’s science fair project, sharing the title of the book, makes its appearance at the end of the play when Ruth’s despise for her mother is at its apex. Tillie explains what her science fair project was about, and its metaphorical meaning is not lost.

The marigolds Tillie was growing were exposed to varying degrees of gamma radiation and it was mixed result on the development of the flowers. Some flowers shriveled and died under the influence of the gamma rays, but others flourished. These flowers mutated and grew more beautiful because of their growing conditions. Tillie was the marigold, her mother and her growing conditions were the gamma rays.

There are two probable outcomes for Tillie and Ruth when they grow up: They can shrivel and fail, or they can become stronger and more beautiful. It is clear to see who will grow and who will die from their shared childhood. 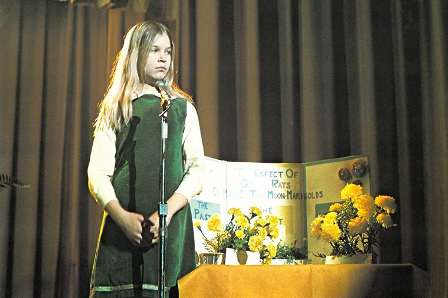 This book is short but sweet, capturing the family’s relationships perfectly. When you begin the book it is easy to think that Beatrice, the mother, is the main character, then Ruth, but by the end you notice the wisdom and foresight that Matilda holds in her quiet observation of her world makes her the main character. Hearing her science project and realizing how she sees her environment makes you see the play from a different window.