We’re Not Gonna Take It: L-S teacher gets hair cut for charity

By LS Pioneer News - March 19, 2018
During February's mini-THON's homeroom competition, Lampeter-Strasburg Mandarin Chinese and English teacher Mr. Brian Fisher dared his students that if they raised the most money, he would get Chinese characters shaved into this hair.

It was a dare his students welcomed, winning the challenge. So last week, Mr. Fisher went to The Cutting Edge Barber Shop on East King Street to get his hair cut. 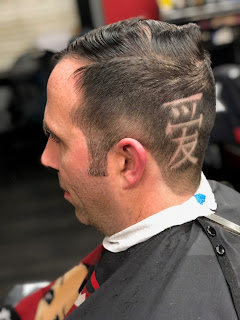 His stylist, Daniel, has a lot of experience cutting designs, but he had never done Chinese characters before. Mr. Fisher asked him to style the character 爱, meaning “love,” and the four diamonds logo in the back of his head. 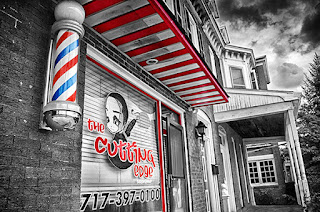 Daniel started at 6:15 and cut until 7:45 pm, even though he had been working since 9 a.m., the barber shop had closed, and all of his colleagues had left.

He did an amazing job! Mr. Fisher also the teacher instructed him how to shape and order the characters; he shaped all of the perfectly-crafted lines with just his razor. 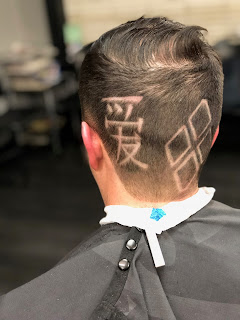 Mr. Fisher gave Daniel an A+ for his work! Mr. Fisher learned during the course of the styling that he had four family members pass away from cancer. He was very pleased to help us out in this way to support the cause of the Four Diamonds Fund. In fact, Daniel's boss donated the $50, 1.5 hour styling free of charge. Bravo to the men at the Cutting Edge!

The other interesting tie-in to this is that during Mr. Fisher's Mass Media class, they were discussing how the content of a message is significantly impacted by the accompanying images. The class listened to and watched the 80’s Twisted Sister classic, “We’re Not Gonna Take It,” which is obviously a call to rebellion.

However, in the last few years, the lead singer, Dee Snider, revised the song with just a piano background and featured pediatric cancer patients in his video. The students concluded that the song now referred to a call to rebellion against cancer.


Mr. Fisher hopes that this small act of getting his haircut is a reminder of why we do the mini-THON events – to show our love and support for families walking through the hard road of pediatric cancer and to spur all of us on to fight the good fight against cancer.
Haircut Mandarin Chinese Mr. Brian Fisher The Cutting Edge Barber Shop Twisted Sister We're Not Gonna Take It