By LS Pioneer News - February 15, 2018
Last week, the Lampeter-Strasburg High School held a mini-thon to raise money for the Four Diamonds Organization. The Four Diamonds mission is to conquer childhood cancer by assisting children and their families through superior care, comprehensive support and innovative research.


Around midnight, there was a variety show in the PAC that featured everything from light saber tricks to dancing to jokes and blueberry eating. After that the Olympic events took place along with the catered dinner from Pasquale's.

Soon after they served ice cream form the ice cream bar, everyone went down to the gym for bubble soccer. Watching and playing bubble soccer was the highlight of most peoples all-nighter.


As 6 AM was setting in, the mini-THON committee gathered everyone into the gym for a guest speaker who battled cancer herself. She spoke about her experiences and interactions with the Four Diamonds organization.

After she spoke, the committee revealed the grand total raised. The amount was originally thought to be $13,403.63. However, one of the largest registration deposits was missed in the final calculations. The actual amount surpassed the $15,000 goal with $18,579.63! 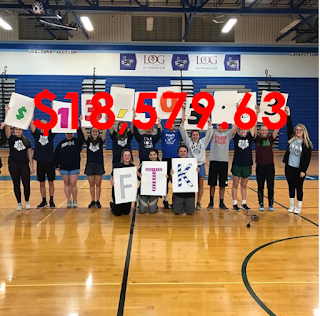 The mini-THON committee thinks they can get to $20,000 and are hoping you will join them in a fundraising spree! They are looking for 150 people to donate a maximum of $10 to our Donor Drive by Friday

Everyone there went on a reflection walk to take time and think about what we are thankful for.

They sent us off with donuts and chocolate milk. Time to crash.


Penn State University has a larger event, which this event is modeled after, called THON which helps raise money for kids struggling with cancer. They earned over $10 million in 2017. They go to  extremes to support this cause. After they created THON many schools nationwide created “Mini-THON” for high school students jump in and support this cause.

Penn State’s THON is the largest student-run philanthropy in the world helping over 3,700 families and raising $147 million through the efforts of 16,500 student volunteers.

Overall, participating students had the best time last weekend at spending time with friends and partying all night long to raise money for pediatric cancer.