Out of the Box Robotics advances to States 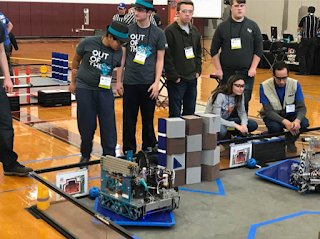 Lander and his team will be blocking out the calendar for March 16 to the 18.

Because they are headed to one of four FIRST Robotics Super Regional qualifiers in the nation at the University of Scranton. During this weekend roughly 75 teams from the US northeast corridor will compete for a bid to the world championship in Detroit, MI in April.

After parking their robot on the balancing stone as time runs out, the three person drive team celebrates a "Cipher". A team is awarded extra points for stacking the glyph blocks in a specific pattern called a Cipher.