By LS Pioneer News - February 13, 2018
Every year we get those yummy “Fastnacht” treats. Fastnacht is actually a term used in and around the German city of Mainz, just outside Frankfurt in Germany.

It describes a season starting every year on November 11 at 11:11 am and ending on Ash Wednesday. There were lots of parades and lots of party events in Germany the past days. Fastnacht is also called Karneval = carnival in other parts of Germany. 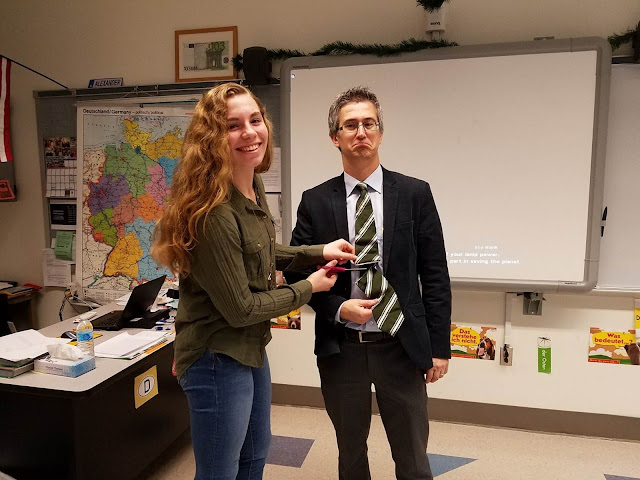 On the one hand, it is associated with festivities of the Christian Church. But during the Middle Ages, it was also a way of driving out the evil spirits of winter and encouraging the coming of spring and good crops, since people would put on scary masks and outfits during those events and parades.

Finally, Fastnacht gave people of the lower class a once a year chance of being able to attend events with people of the higher class – again because the masks and costumes would hide your true social class and status.

“Weiberfastnacht” is the Thursday called before Ash Wednesday. In German tradition, women are allowed to cut off the tie of any men. As the German teacher, Mr. Breitkreutz, tries to show his students what German culture is about.

If you see Mr. Breitkreutz today now you know why his tie looks different.