Mr. Jeff Gallagher is a phenomenal Earth Science teacher. What you might not know is he also served in the military. He served for three years in the Army. You can read more about his military service here. 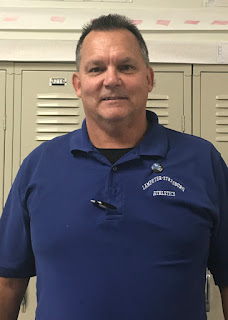 As far as his teaching career, Mr. Gallagher has been teaching for 24 years. Twenty of those years, have been at Lampeter-Strasburg School District.

He has three advanced degrees: a Bachelor’s in Education, a Master’s in Education, and an Associate’s in Electronics. If Mr. Gallagher wasn’t a teacher he said that he would want to be an ice hockey player if he wasn’t “too old.”

When asked if Mr. Gallagher was a "bad kid" growing up. He said, "Not really. But that every kid usually is a trouble maker." He said his grades were always fairly good, As and Bs.

It took a few moments to answer when Mr. Gallagher was asked what his favorite childhood memory was. Eventually he narrowed it down to two memories. One was the first time he flew in a propeller type airplane when he was about seven or eight. The other memory was the first time he saw the monorail, at Disney World, go through a hotel. That concluded the interview of the famous Mr. Gallagher.