In My Own Words: L-S Defeats Northern Lebanon In District playoffs

In My Own WordsIn this installment of In My Own Words, Sean McTaggart talks last Friday's icy cold Northern Lebanon Districts playoff game.

On Friday, the Lampeter-Strasburg football team made the long 90 minutes commute to Northern Lebanon for our first District playoff game. 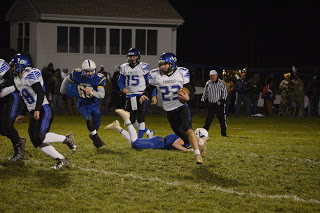 As we walk onto the field, it was ten degrees colder than it was outside our locker room. With the wind chill, it was 15 degrees. Warming up was not so much of a warm up with how cold it felt. As we run over plays, throw, catch, run, and block, we knew we were ready.

On the first drive, we had a couple of third and fourth conversions, but on around the one yard line we fumbled and Northern Lebanon took over with momentum.

After the first quarter, Northern Lebanon was leading 6-0 after a couple missed plays by us, and a long touchdown pass by Northern Lebanon. Then later a blocked extra point. 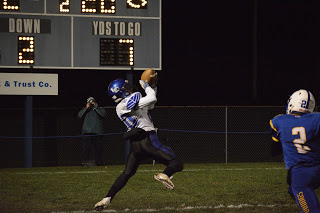 After another turnover by the Pioneers, we gave up another touchdown to go down 13-0. With a minute left in the second quarter, we scored on a 30 yard touchdown pass. We ended the half with full momentum and ready to fire out in the second, while down 13-7.

The first drive worked out exactly how we wanted it to. A touchdown! We were now leading 14-13. After a couple of drives with great defense on both sides of the ball, we were now trailing again , 19-14 on another long touchdown and another blocked extra point.
With the ball, in the fourth quarter, we were determined to score. We were firing off the ball every play. We realized we were better than Northern Lebanon and it showed. We ended up scoring three more times and ended up winning 34-19. It was a hard fought win.

Come support the Pioneers this Friday as they take on Bishop McDevitt this Friday.

In My Own Words is a first person written series that highlights Lampeter-Strasburg High School students activities.
By Sean McTaggart Districts Football Football Game In My Own Words