By LS Pioneer News - October 05, 2017
On Saturday, my dad and I, along with a small group from my church, Blossom Hill Mennonite, left at 6 am on a bus for Washington D.C. There, beginning at Lincoln Park and finishing at the National Mall, thousands of people gathered to show their support of African American rights and anti-discrimination where the March for Racial Justice and March for Black Women would soon take place.

Though it was a demonstration of outrage at the racial injustice taking place in our country today, many also attended to advocate for those of the transgender and LGBTQ+ communities, along with those of minority religions and immigrants.

In the approximate two and a half hours before the march itself, guest speakers, organizers, representatives, and activists preached words of empowerment to the restless crowd. Many of these people spoke about their experience and struggle of being part of a minority, and why we were gathered there. This rallying also included a group of native people who performed in a drum circle on stage and music. 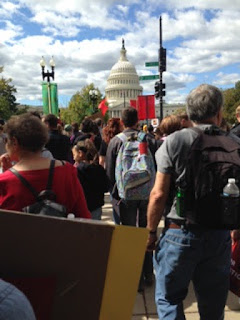 The route took us through the Capitol Hill neighborhood and past the Justice Department. It was a two mile walk, and took about two hours in total. Words of empowerment, Black Lives Matter, and gay and trans pride flags and buttons were sold during the rally, and every other person was carrying a poster or a sign in support of racial justice and equality.

Lots of chanting broke out constantly throughout the march, especially when we passed a Trump International Hotel, where we paused for a few minutes to hold up our signs and continue to express the unrest in our nation at the recent injustices against those of different races and other minority groups. 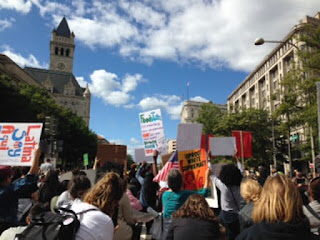 Though our voices and feet were sore when we arrived back in Pennsylvania at 9 pm, I can say that I found the march very empowering and important, and I hope to participate in movements such as these in the future. This is a subject that is very important to me personally, and I am so grateful that I was able to be a part of the racial justice movement. However, the hope is that someday we won't need to organize marches for basic human rights, and equality will be a principle accepted by all.