By LS Pioneer News - October 22, 2017
Last Wednesday, October 18, the Girls Volleyball team celebrated Senior Night. They honored the three seniors, Emma Cohen, Becca Cohen, and Hailey Hildenbrand, with heart-wrenching speeches and beautiful bouquets of flowers. Before the game started, each senior lined up with their parents and listened to their fellow players and friends speak about their amazing personality and their inspiring drive to be the best volleyball player they can be. 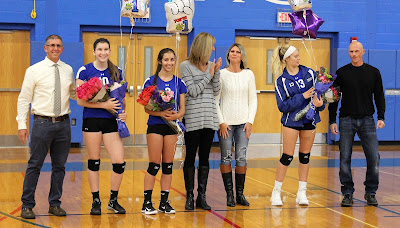 Additionally, everyone congratulated Emma Cohen, the Varsity team’s setter, who broke the previous Lampeter-Strasburg record of assists. The previous standing record was held by Allysa Tantala ‘12, who had 951 assists, but is now held by Emma Cohen ‘18 with over 1,000 assists. We all wish good luck to our seniors, each of whom is planning to attend college next year.

The JV team took the court first, excited but nervous. L-S was playing Garden Spot and the girls haven’t won a single game against them for six years. Tensions were high on this special night, everyone hoping L-S could pull through, but unfortunately the six turned into a seven. JV lost 2-0, and Varsity lost 3-0.

JV lost fruitlessly in the first game, losing 6-25. But the girls didn’t give up, and although they lost the second match too, it was much closer with a final score of 21-25 . Amazing serves by Kyra Hersh and McKenzie Manning, who both served 5 points in a row on Garden Spot, brought L-S in the lead, but they struggled to return Garden Spot’s serves and spikes, losing both games. 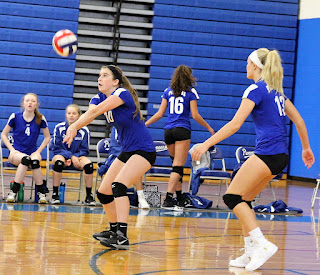 At 7:00 the Varsity game commenced. During the first game the team was strongly led by Betsy Brenneman, who scored the first three points with a solid block, hard spike, and fast serve. An amazing dig by Emma Cohen sent the crowd cheering, tying the game 6-6. It was a close start to the game, but Garden Spot pulled ahead. L-S just couldn’t keep up with the hard serves and spikes that sent them diving this way and that. Desperate for a win, L-S senior Hailey Hildenbrand hit the ball hard over the net, scoring a point and causing excitement to course through the crowd. Unfortunately Garden Spot was too far ahead, and won 25-16. 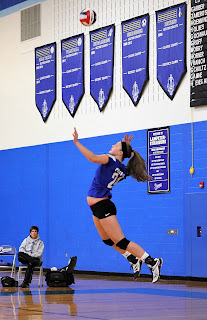 The second game was slightly closer; Garden Spot won 25-22. L-S had an abundance of amazing spikes and serves, but Garden Spot managed to return close to all of them. Sophie Campbell served two aces on Garden Spot and with several outstanding blocks by Betsy Brenneman, the girls stayed in good spirits, cheering each other on. 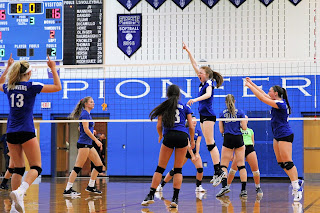 In the third game, the girls fought harder than before. They scored the first point with a block by Betsy Brenneman. With a spike by Haley Hoover right into an empty space on Garden Spot’s side, the score was tied, 7-7. Abbie Powell then went on to serve three points on Garden Spot, one of them an ace, yet Garden Spot caught up and tied the score again at 10-10. Three more blocks by Haley Hoover, Betsy Brenneman, and Becca Cohen, brought the score up to 14-12.

Yet again Garden Spot caught up and tied the game 15-15. Sensing a possible win, Haley Hoover pulled two consecutive blocks bringing L-S in the lead 17-16. It was a neck and neck game up until this point. Garden Spot, with their hard spikes, endless blocks, and floating serves, pulled ahead, bringing the score to 21-17. L-S fought hard but lost, the final score 25-19. 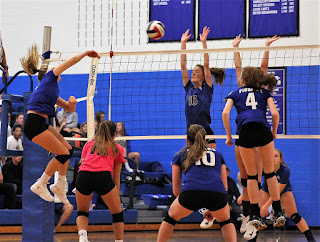 After the games, to celebrate Senior Night and Hailey Hildenbrand’s birthday, everyone in the gym was served cake, a sweet way to end the night.

Good luck to the girls during playoffs, and best wishes to L-S Girls Volleyball’s three seniors as they all make their way to college next year.