By LS Pioneer News - September 28, 2017
On Wednesday, September 20, the Girls Soccer team traveled to Cocalico to try and maintain their newfound streak of victories. Fortunately, both teams ended up winning with a score of 2-1. 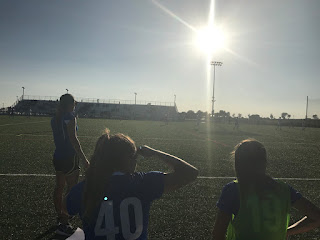 The Junior Varsity game saw the addition of Alyssa to compensate for the recent loss of their midfielder, Sara Boyd, whom is out with an injured ankle. Even with their normal five substitutes, however, the JV players couldn’t seem to catch a break between the sluggish aura suffocating the team and the unrelenting and ruthless heat. Many felt themselves not playing as well as they knew they should’ve been and grew increasingly frustrated and stressed as the game wore on.

This negative feeling wouldn’t stop the Pioneers from gaining the first goal though, as McKenna Conklin scored a goal around Cocalico’s goal tender with an assist from midfielder Lane Koppelman. This first goal was amazingly scored on the first two minutes of the game, allowing a brief flow of hope to course through the girls before Cocalico came right back and scored their own goal, similarly going one on one with the Lampeter Strasburg goalie, much like McKenna’s score.

The Pioneers did not let that discourage them, however, as Lily Stotzfus gained her own beautiful goal through an assist from Alyssa. This was Lily’s first goal and really gave the team the spirit to keep playing. The team, though admittedly not its best, played very well, especially with the rising tension and agitation threatening to swallow them whole. The game ended with the 2-1 score, and the JV team survived another game, allowing them to boast on their four win streak.

Although the entire team played well and everyone deserves to proper recognition, Riley Dawson, the goal keeper, and Gwenn Spotts, a defender, definitely deserve the title of MVPs as they came out when everyone else wasn’t quite there and played their hardest, regardless of the weather or tension on the field. Dawson was playing exceptionally well and repeatedly came outside of her box to help her defenders and successfully stop multiple shots taken at her. Spotts managed to take the title of having her name shouted positively the most amount of times in that game, mainly for her sheer speed, ferocity, and overall game skill.

In other news, Varsity was nearing the last ten minutes of their game with a score of 1-1, their goal having been scored by none other than Danielle DiPace. Mere minute after JV had joined the crowd to watch this intense game, Kendall Ream managed to score with 6:12 on the clock. Needless to say, the Pioneers worked hard and it paid off greatly, showering them an after victory glow and revealing itself in the form of a loud school bus screeching song lyrics in off pitched harmony on its way home.


“It was definitely hot and sweaty, but we pulled through and scored the win just like I knew we could.” – JV Soccer Team

The Pioneers next game is today, September 28 when the Baron's of Manheim Central come to challenge the Pioneers. The Pioneers will be looking to avenge the football team's recent loss to Central. Good luck Pioneers!