The First Performance of the Football Season: A Massive Success

By LS Pioneer News - September 08, 2017
Last Friday, September 1, was the first football game of the 2017 season. Just like my take on Tag Day (see last post here), I had no clue what the night would entail. Our game was at Eastern York High School, across the Susquehanna. I heard it was the first time we have competed against them, so no one knew what to expect. 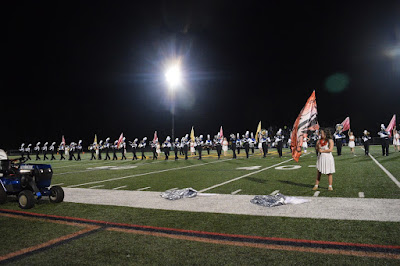 On the bus ride over, we jammed out to classic rock, blasting it full volume out of someone’s iHome. I ignored my nerves, hoping that clumsily singing “Sweet Caroline” would calm them. It worked, to a certain extent.

As we pulled up to Eastern York High’s parking lot, my butterflies came back, but only for a little bit. We parked and began to unload. As everyone scrambled out of the bus to the uniform racks, I realized that I had no time to be worried I have music to memorize and a crowd to pump up. When we were dressed in our uniforms, we grouped into twos and marched down the field.

As we settled into the cramped visitor stands, attendees began to filter into the visitor stand. By the time the game started, our neon student section had to move for more people to sit.

Since visitors do the halftime show at away games, we got to see Eastern York’s marching band perform first. As they marched onto the field, I noticed how small the band was. They had to be at least half our size! Although they were quaint, I still enjoyed seeing their show- after realizing how hard marching actually is, I appreciate everyone’s.

As the game began, I did my best to perform the music. All the song as really fun and fast- my fingers can barely keep up! The song choices and timing are made up on the spot. Mr. Royer and Grayson, our two band directors, keep a look-out on the field, making sure our drum major knows when there is a first down.

The first half went by in a second, and before I could process and evaluate what was happening in the game, it was time to perform. We strapped on our hats and filtered down to a neighboring baseball field to warm up. When we finished warming up and prepared for the real thing, my butterflies came back full force. I gulped and wished my friends luck then marched onto the field with the drumline’s cadence.

The show moved at lightspeed. I stumbled and misstepped a couple times, almost plowing into a clarient, but the overall show was incredible. Eastern York’s marching band, although we were visitors, cheered for us the louder than our own student section! It made my petty mistakes mean nothing.

After performing, we got to have third quarter off. Although that is a large part of the game, those twelve minutes seemed like two! I barely had enough time to buy a water from the concession stand and sprint back to the visitor stand.

As the game came to a close, our football team defeated Eastern York 37-7. As quickly as we arrived, we paired back up and marched to the buses. The buses pulled out of the parking lot and turned the music back on to sing our prideful hearts out- although some of us just dozed off.

Our first performance was a success, and I can’t wait to be involved in four more years of this!