By LS Pioneer News - April 30, 2017
Today marks the one hundredth day since President Donald Trump took the oath of office on a cold January morning. Despite immense media bias and leftist fear-mongering, the beginning of Trump's administration has been full of positive milestones. Like the beginning of all presidencies, there have also been some setbacks, but great progress has already been made in these first few months. 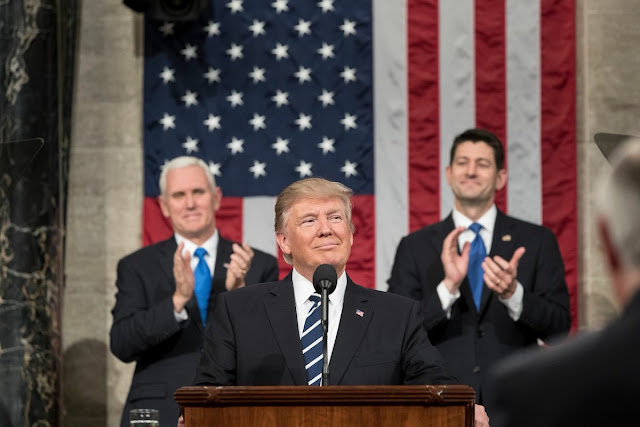 According to CNBC, President Trump's administration is "on track to work out pretty well for stocks." Indicators have achieved record highs, increasing 10% since the election. While most economists credit this rise in equities to a renewal of optimism, President Trump has taken considerable steps to improve the economy, such as withdrawing the United States from the job-killing Trans-Pacific Partnership. He has also signed executive orders aimed at reducing unnecessary and overbearing regulation. For every new regulation passed, two regulations must be eliminated, and new regulation cannot be passed without direct approval by the administration or an agency led by Trump appointees.

One of the president's most significant campaign promises was the repeal and replacement of Obamacare. The contradictorily titled Affordable Care Act has caused millions of Americans to lose their jobs, be forced into part-time work, lose their doctors and health insurance, and pay skyrocketing premiums. In March, House Republicans introduced the American Health Care Act, which initially failed due to conservative opposition tagging it as "Obamacare-Lite." Since then, however, Republicans have returned with a revised version of the bill, now endorsed by the conservatives who originally opposed it.

While the fate of the American Health Care Act is uncertain, the bill is intended to repeal the portions of Obamacare involving the federal budget so that the House's ability to enact tax reform is expanded. President Trump's proposed tax plan contains the largest tax cuts in history. The proposal would lower the corporate tax rate from 35% to 15%. The proposal would also simplify the tax code by eliminating several taxes, reducing the number of tax brackets, and striking personal deductions except for charitable and mortgage deductions. All in all, this tax plan would be a major victory for both conservatives and everyone else who pays taxes.

Foreign policy has played just as influential a role in these first 100 days as domestic policy. Following the Syrian government's chemical attack on its own civilians, President Trump ordered a cruise missile attack on a Syrian airfield, raising questions about U.S. policy regarding Syria. Soon after, Defense Secretary Jim Mattis assured, "Our priority remains the defeat of ISIS," and on April 13, the United States military dropped the largest non-nuclear bomb on eastern Afghanistan, killing 92 ISIS militants and no civilians. Both events affirmed Trump's willingness to take decisive action concerning foreign conflicts.

North Korea's most recent violations of international law have caused great concern among most governments worldwide. During a visit to South Korea, Vice President Mike Pence stated, "Strategic patience has been the approach of the last American administration and beyond. For more than two decades, the United States and our allies have worked to peacefully dismantle North Korea's nuclear program and alleviate the suffering of her people. But at every step of the way, North Korea answered our overtures with willful deception...even conducting a failed missile launch as I traveled here for this visit. The era of strategic patience is over."


Perhaps the most significant of Trump's actions has been his nomination of Judge Neil Gorsuch for the Supreme Court. Like his predecessor, Justice Antonin Scalia, Gorsuch is a strong constitutionalist who realizes that a judge's role is to protect the principles exhibited in the Constitution, not to legislate from the bench. A primary reason that many voted for Donald Trump was to ensure the nomination of justices dedicated to preserving the rights guaranteed by our founders. Justice Gorsuch was an exceptional choice, and his presence on the Supreme Court should long outlive Trump's presidency.

President Trump has also reinstated the "Mexico City" abortion policy, advanced the Dakota Access and Keystone XL Pipelines, provided relief from the Affordable Care Act, placed a lobbying ban on executive appointees, and improved accountability at the Department of Veterans Affairs. Other actions include reevaluating visa and refugee programs, increasing border security measures, and cracking down on sanctuary cities. Already, the United States has experienced a 73% reduction in illegal immigration.

According to a Fox News poll, 96% of Americans who voted for Donald Trump do not regret their decision. It is true that many campaign promises still need to be kept, most notably the securing of our southern border and the repealing of Obamacare. However, these first 100 days have outlined a clear agenda that will guide America for the remainder of at least four years.

Ultimately, I believe it is an agenda that will have a constructive impact on the United States.