By LS Pioneer News - February 01, 2017
"Would you please rise and stand for our National Anthem?" says the announcer at the Lampeter-Strasburg vs Ephrata high school swim meet. It was Ephrata's last home meet of the season. 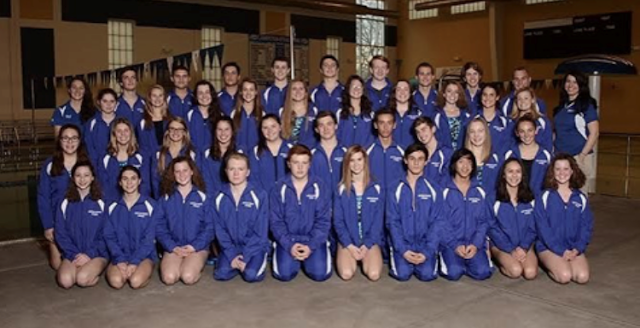 There was complete silence throughout the room while everyone was waiting for the singing of our National Anthem. A few moments later instead of the National Anthem, loud static came pouring out of the speakers.

After waiting a minute, a group of L-S girls unprompted began to sing. As they sang, the swimmers encouraged everyone to sing along. Eventually, everyone in the natatorium was singing along. It was an inspirational start to the meet.

Once the meet started, both teams could tell that it was going to be a close meet.

After the meet was over, both teams anxiously waited to hear the score. The boys had bested the undefeated Ephrata boys team by five points! Ephrata boys had controlled the meet from the beginning until the 100 breaststroke. when Colin Anderson, Dylan Grau, and Steven Hollern swept the event, giving L-S the lead and eventual victory.

The Ephrata girls team; however, defeated L-S, 95-75. The victory gave Ephrata the Section Two title. It was the team’s first since the 2010-11 season