Students pummel each other in fast paced dodgeball tournament

By LS Pioneer News - December 14, 2015
More than 50 students dragged themselves out of bed on a Saturday morning for the opportunity to pummel each other and teachers with Nerf balls at Varsity Club’s annual dodgeball tournament.

The contest commenced at 10:30 am and before noon when the dust settled the team Black Beans and White Rice won the tournament and ultimate title of champion.

None of the freshmen teams fared well, especially the Savages, who lost all seven games and the Canadians posting only one win.


The faculty team--nicknamed Exclamation Point—struggled as well losing their first five games until the final two rounds of the morning posting the first faculty ever “winning streak in L-S dodgeball tournament history. Unfortunately, the faculty also holds the record for quickest elimination in their second match of the morning lasting only 45 seconds against the baseball team. See the clip of the baseball team pummeling the faculty in the YouTube video embedded below.

It was not just the faculty team that struggled to stay on the court. In several mismatched games, skilled players with strong arms made short work of weaker teams in matches that only lasted a minute. 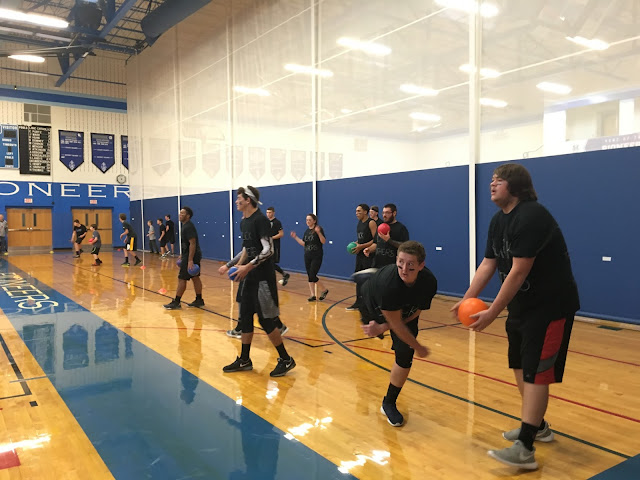 After four rounds of play with every team playing seven games, the points and rankings were posted.

Points were awarded in the following fashion:
Based on the tally of points, the top four teams would proceed to the final rounds of the tournament.

For the semi-finals, Black Beans and White Rice battled Beast and his Lifters, while Scared Hitless played against the Black Panthers.

When the teams played in the primaries, Black Beans and White Rice defeated Scared Hitless, which added to the suspense of the final round.

As all the losing teams and referees gathered around the gymnasium to watch the final battle, both teams gave the game their all in an attempt for victory, but only one team could win, Black Beans and White Rice won the tournament.

The winner of the tournament celebrated their victory with dodgeball champion tee shirts and team pictures, and the determination to return for the third year to dominate in the Varsity Club dodgeball tournament.