By LS Pioneer News - October 06, 2017
Last Friday, September 29, we played our second home game of the season against Ephrata. After our loss last week against Manheim Central, we were ready to reclaim victory on our home turf.

After arriving at five, we practice in the high school parking lot for a short while, brushing up on the new visuals and foot placements we added for during a section of the second part. They are pretty easy to learn and carry out, but it is a matter of remembering them. We finish promptly and suit up in our full uniform, hats and gauntlets. 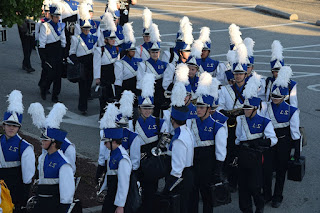 We march in twos down to the stadium, making sure we step in time with the drum cadence. After entering the grounds, we drop off our hat boxes and bags in the stands and form a line to march out to the field. I forgot the feeling of panic and nervousness of playing at home, especially on that uneven field…

Before I can begin to create a vivid depiction of me magically forgetting all of the performance and making a fool out of myself, we march onto the field, props in hand. I have been upgraded from tarp carrier to curtain holder for today’s game due to the absences. As our cadence echoed through the open stadium, we hurriedly place the props down (should I say, in the proper area!) and coolly walk to opening set. The piccolo section recently created a new tradition where we walk to set with our arms on each other’s shoulders.

In my case, the show goes extremely well! I consider it the best show I have performed yet, remembering all of the visuals. I think that all of our sets went smoothly and seamlessly. Although I feel satisfied, no one else that I talked to seem to agree with me. Everyone says that it was perhaps the worst show they have ever performed! I should’ve shared my luck with them.

Because we had the pregame show, I didn’t feel the half-time havoc I usually do. Instead of panicking, I work on memorizing the stand music, which I desperately need to do. Unlike last game, we play a decent amount and variety of music, including my two favorites, Wipe Out and Hey Baby.

Ephrata’s halftime show goes pretty well. Their show is #15minutes, a show about rising to fame. They include songs like “Fame”, by David Bowie, and “Applause”, by Lady Gaga. I remember their show front the coalition, and they improved a pretty great amount. It is interesting how about a week of practice and rehearsal can boost a performance. 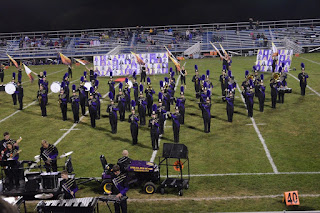 During our off-quarter, I was reluctant to take of my jacket. During all of the previous games, I was itching to take my jacket off, drenched in sweat. But now, it was a little chilly outside. I quickly swap my show jacket for a hoodie and rush to go get a band burger.

The fourth quarter goes relatively quick compared to prior games. Before I could blink, our band director calls for “The Final Countdown”. We play it end to end, and the clock drops to zero.

The score ends in our favor, 61-6. Surely, this is the first of another streak this season, and considering next week is the Solanco Milk Jug game, I pray it is. 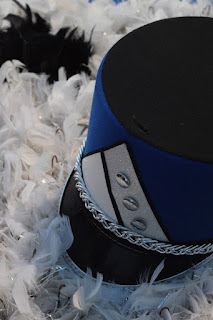