By LS Pioneer News - October 10, 2017
On Monday, October 2, the Lampeter-Strasburg Pioneers faced off against the Lebanon High School winning 9-1. The Pioneers controlled the game having the ball a majority of the time. Unfortunately, Lebanon was able to score their first goal of the season. Worse yet, the goal was scored by accident by one of the L-S players. 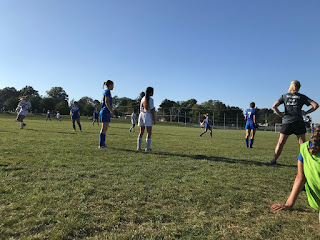 The first ten minutes of the game saw much individual greatness. Within the first half alone seven goals were scored. Three of the goals were by senior and Captain Kendall Ream, two of the goals were from freshman Danielle DiPace, and junior varsity freshman Lily Stoltzfus and senior varsity Captain Hannah Adams each scoring a goal a piece.

The second half only saw two additional goals. One of these goals was by Maddie Stabinger on a Penalty Kick (a kick commonly taken when a player is fouled inside the 18 at the line shown between the 6 and 18). This PK was a result of a foul on the newest member of varsity, sophomore McKenna Conklin. The other goal was scored by junior Toby Harnish, with an assist from JV Captain, Lauren Brennaman.
​​
Currently there is a three way horse race between Mannheim Central, Garden Spot, and L-S for first place as playoffs approach.