That lyric from Johnny Cash's "A Boy Named Sue" might best describe last night's football match-up. Entering the game both the Pioneers and Manheim Central boasted records of 3-0. Each team's offense has been juggernauts. Last week quarterback Todd Shelley threw for 434 yards with five touchdowns in the double overtime victory over Conestoga Valley in the famed Lampeter Bowl. In addition, Cam Niemeyer completed 12 catches bringing the Pioneers total yardage to 558.

On the other side of the field, Central posted 530 yards and 49 points in their previous contest. 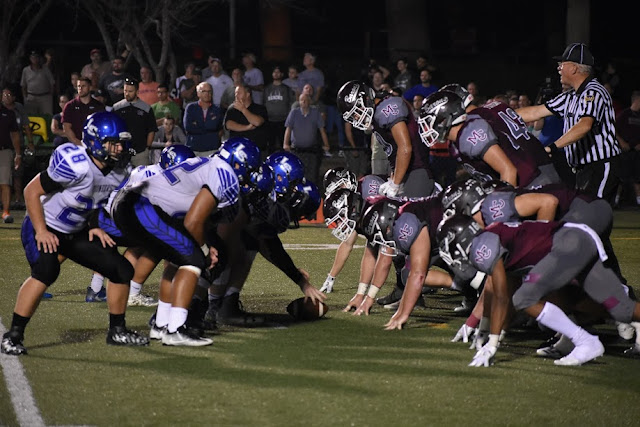 During the first half, L-S kept Central off their game boasting a six point lead at the half with a score of 13-7.

Unfortunately after the half, the Barons answered that six point deficit with four touchdowns in the third quarter to defeat the Pioneers, 41-20.
The Pioneers now 3-1 will be looking for redemption next week as they defend their hoe turf against Ephrata on Friday at 7 pm.

See more great pictures by Klein and Emmerling from the game by clicking here and here.